They Walk Among You 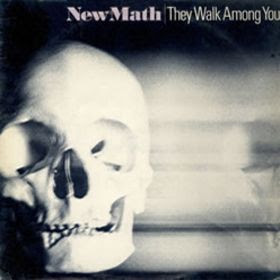 New Math were a post-punk band that wasn't generally known outside of their hometown of Rochester, New York. They released a few seven inches and this twelve inch EP titled They Walk Among You. Soon after this release the band changed their name to The Jet Black Berries, opted for a less electronic sound, and landed a deal with Restless Records. They Walk Among You was released in 1982 and it really sounds like it. Reminds me a little of The Stranglers or a darker Wire. I can't imagine being interested in a whole album's worth of New Math material, but this EP is enjoyably maudlin and retro cool for days. Neat little record.
Here
Posted by Aesop at 12:00 AM

Wow,The Jet Black Berries are one of those bands I've been meaning to look into since I was in high school. All,i've ever heard was Love Under Will from the Return of the Living Dead soundtrack. This hits the spot..................Troy

i can see what you mean about a whole album being harder to swallow. that's why i was glad a lot of these types of bands just put out 12" eps back in the day ;)

added the title track to my halloween playlist.

is this the same band that did "die trying"? and can we get a re up?