These Songs Will Always Break My Heart 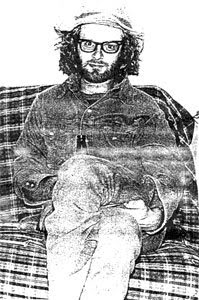 On this day just six years ago Matty Luv left the earth forever. He was my best friend, my partner in crime, the Huey to my Bobby, the Hall to my Oates. I played music with Matty for a period of almost twenty years, and I can honestly say, without bias, that he was one of the great songwriters of our time. As great as Dylan, D. Boon, Darby Crash or that guy that stabbed himself, can't recall his name. Matty's amazing gift for lyrics and sweet pop hooks was uncanny, perhaps the byproduct of his very restless and tortured inner psyche, perhaps not. In honor of his memory I have decided to share the Yogurt tapes. These are extremely special, when he was alive Matty only gave these to those he deemed worthy of listening to them. I guess that's a little elitist and fucked up, because these songs are so fucking great, it'd be a shame to die without ever hearing them. And people do die, believe me, motherfucker, they really do. I guess a little history of Yogurt is due. Yogurt wasn't really a band. It was the name given to Matty's home 4 track recordings which started around 1993 and continued until his death in 2002. There are countless hours of weird lo-fi little songs, skits, sound collages, trippy layers of loops floating around on oddly labeled cassette tapes, but these songs were the ones that made it on to the home-dubbed editions Matty gave away. Matty always labored to make the package of the tape he was giving away very personal, painting the box and hand writing the song titles (which often changed.) Yogurt features alot of guest performances by whoever would drop by our 24th street flat at the time. Wherever you hear live drums that's me, and Matty had me sing here and there (that's me on "Small Town Boy".) After Hickey broke up in 1997, we formed a live line-up for Yogurt with him singing and playing guitar, me singing and playing drums, and Chubby (Hickey's original bassist) on second guitar. We translated some of our favorite songs from the tapes into live rocking numbers and played them, high as fuck. It was kind of a shambles, the live Yogurt thing though, we were all at our worst in the chemical way, and I felt the more we played live like this, the more we tarnished our already spotty legacy. We did manage to eke out a pretty good 15 minute studio recording with this incarnation, and if anyone is interested I can post that too some time. Anyhoo, I quit, and Yogurt was relegated back to the chord/wire/tape miasma of Matty's closet. Matty made recordings under the banner of Yogurt until his death on October 5th 2002. October 5th, this day will always break my heart.
Here
Posted by Aesop at 12:00 AM

Thanks for the Yogurt, my favorite treat.

thank you so much aesop. i got these recordings a few years back from nate, who got them from you. i've tried to spreadit around to those who felt would really benefit from it. good friends, young aspiring punk rockers, metal heads with hearts of gold, etc. this is some of the most inspiring, beautiful, genius music i've ever heard.

i never got to see hickey, but i was lucky enough to see yogurt maybe a year before matty passed. it blew my teenage mind.

I like it. It reminds me of Maher Shalal Hash Baz in a way. And sure, I'm interested in that studio recording.

I did not know Matty. I saw Hickey a couple of times in Athens, though, and had a hell of a lot of fun at those shows. Matty left behind work that is still being enjoyed by people all over, which is something extremely important.

Thanks for posting these tapes.

Rest In Peace, Matty Luv. you'll always be around....

Thanks for this Ace.

I don't really know what to write here, but thank you for allowing us all to hear this.

Hows about putting some on itunes or something?
for the people that don't wanna pay to use that site

You don't have to pay to dl from that site.

RIP Matty. Never knew you, but Hickey and the Fuck Boyz music ALWAYS called my name.
That said, Aesop, thanks for this post. I will always be interested in your music.

Matty is revered as an icon with a certain circle of people here in Tulsa. Rightly so. I remember getting a call the day he died; the other end filled with sobs and choked, garbled words. Truly a mad tortured genius, that Matty. Didn't some Yogurt stuff surface on a comp with The Unit Breed and other NW punk bands?

Nick, that comp stuff is the 15 minute studio recording we did with Joe Demaree that I mentioned in the post. At some point it will appear here.

Matty will never be forgotten. Thanks for this Aesop!

Awesome. Ro breaks these tapes out every now and again. It's great that we can preserve the originals. Thanks friend.

Thank you very much for sharing this amazing and personal music with us.

Thanks, 'sop.
These are pretty amazing to say the least.
I'm puttin' these next to my Roky Erickson tapes.

Hope your weekend was alright.
Drinkin' a brew for your homie right now.
Great post, dawg.

thank you for this. i spent some of my best years in SF and hickey was a big part of that. i'm so blessed to have seen and experienced that.
Thanks aesop and thank you matty

I've been thinkin about you all nite Matty.
You were so very special.
-Shapiro

Hey, I saw Hickey I think twice, in someone's house in Auburn, Alabama, sometime in the '90's. Even bought all the 7"s they had with 'em. The first time they played there, it was high summer and so FREEKIN hot in the house, they played nude.
Guess I'll hafta grab this. Those guys were really cool.

aesop, i heard of you first through Ludicra and only heard Hickey years later but posts like this are appreciated. Intensely personal music you'd never hear anywhere else

Condolences & commiserations to you.

Thinking about Matty Luv. ... ... ... those great recordings with the buttons falling off, talking about the fabulous stains, walk in he's standing on a milk crate. Thinking...

Thanks. I never know what to say in these things...

i think "gardener of eden" might be the greatest song ever written, so simple and heartbreaking... mere words could never describe how much knowing matty luv changed my life, or how much i miss him...

Aesop, thanks for sharing this. Seeing Matty (and Hickey) perform live was always an amazing experience. I miss those days.

Brilliant! This is great music.

These songs are excellent, I've been listening to this all night.

I can't wait to get off work to download these at home. Thank you so much for posting all of these, it means a lot.

hello, well i just want to write thanks for the music, i think i like ur blog a lot, and these stories made me feel crazy (also because i was chatting with a girl i like -she likes mew-the band--)... i will listen to hickey more...
just right now i had a good and strange sensation of serenity and of thinking rock is the best and wanting to write shit
thankssssssssss !!!
greetings from mexico citieeee
atte. cheivys

Yogurt was magical, like a gifted squirrel tapping on your window while drooling on itself. Question:
Would you happen to know if "Me you and the boys" ever recorded anything and possibly where to find it if they did?

Cheers Matty. Glad that I witnessed hickey in the dirty south a few times." We're hickey, we're gay" "hey fuck you... Ha, I ve heard better fuck you's in better hick towns than this one my friend"
Much Luv,
Rx.

My childhood, what a fading memory...

this shit is beautiful.

love it. thanks Aesop.

this story makes me sad,and glad that i also have a best friend of 20 years and we make the best most funnest music together. i love the hell out of hickey,and i always tell the story of the hickey/voodoo numb skulls split to people who dont know it,its one of the raddest most amazing things ever..a true life lesson

I saw Yogurt live three times. The first time was at the old Mission Records and Capitalist Casualties and Dystopia were also on the bill. Yogurt were obviously very wasted and I remember being kinda disappointed. About a year later I saw them at the 2nd Mission Records and they killed it. It was a week night and the show was sparsely attended, but I'll be damned if that wasn't one of the greatest live shows I remember seeing! Saw them once again at Mission rex a few months after that and it was still amazing! I'd say as great as any of the times I saw Hickey.