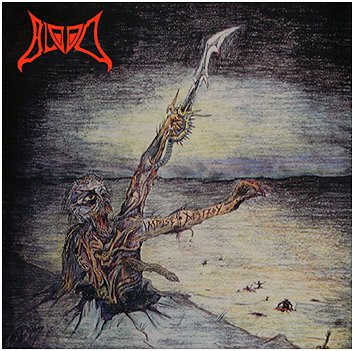 Blood kind of started out as the fun, jokey pastime of four snarky teenagers living in Speyer, Rhineland-Palatinate, Germany. By 1989, however, the lads weren't joking around, and their first album, Impulse to Destroy, came ripping forth like a poorly drawn zombie holding some kind of crazy sword to the sky. The album opens, oddly, with the sound of a jet taking off and then it's a thirty-four minute gut-pummel of greasy proto-death grind crust. Why Blood aren't fucking hailed next to Repulsion, Carcass, and Napalm Death as originators of this sort of filth is beyond me. Impulse to Destroy is an undeniable classic.
Here
Posted by Aesop at 12:59 AM

Hideous recording, excellent grinding. I've had it on red vinyl since 1990.

Hi Aesop. I was wondering if you'd mind if I linked to here on my photo blog. You can check it out first. You don't need to bother replying to this unless you have a problem with it. Thanks.

Impulse to Destroy is my religion.

"Why Blood aren't fucking hailed next to Repulsion, Carcass, and Napalm Death as originators of this sort of filth is beyond me. Impulse to Destroy is an undeniable classic."

I only commented to get traffic back to my lame ass blog where an Morrissey discog in lossless awaits with 1000x1000 cover scans and an autographed buttplug. Don't forget to kiss the ass of the readers they will be your special cyber buddy!

never even heard of these guys, the zombie with a sword would be enough to pique my interest but the description compels me.

Blood were always a fuckin' cool band, though their following releases were relatively poor. In saying that though, any band that BLASPHEMY cited as an influence can't be bad!

Definitely a killer band, their early work is legend. The "Christbait" LP and split 7" with Agathocles are a must as well. And the influence on Blasphemy (and through them Beherit, Archgoat, and the whole wave of bestial warring black filth that followed) can't be ignored.

its kinda retarded how much this band rules.

Blood is impossible to google because of their name. That's the main reason why they're not headlining open air festivals with 2-disc reissues coming out on relapse every month... that and their 7" material is better than their albums (except this one).

one of the first death/grind bands i heard. i got a dub sent to me from one of my penpals on cassette almost 20 years ago, and listening to it now is odd, i remember thinking that this, and the aforementioned bands in the post were the fastest, craziest stuff ever. that blows my mind now. my parents HATED this band.

I bought a BLOOD shirt @ MDF from Guilo of Cripple Bastards on the strength of this blog entry. Cheers for exhuming this lost gem!

I have tried to find a BLOOD shirt for a while now. Google searches are useless. Even in Germany they are rare. I need an email address for Guilo.

The dudes from SelfMadeGod might have some extras. Guilo was peddling stuff for the SelfMadeGod distro the entire weekend.