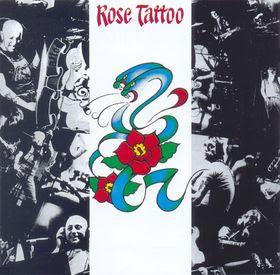 Rose Tattoo, you should know them. If you don't, they were kind of like a working man's AC/DC. Yeah, I know what you are thinking, "Isn't AC/DC a working man's AC/DC?" Look, while Angus and crew seemed content writing great song after song with double entendres about poontang, Rose Tattoo peppered their balls-out pub rock with gritty tales of city life and damnation. These "tough guy with a broken heart" allegories bring to mind Phil Lynott and Phil Mogg, but come straight from the tortured heart of a dimunitive, charismatic skinhead named Angry Anderson. Sure these guys couldn't play as well as their more famous countrymen, but the sheer sincerity of their delivery is worthy of merit. So here I present their first album from 1978. In the album's onset, Anderson let's it be known that he is a "Rock n Roll Outlaw." However, shit gets hectic on the second track, "Nice Boys," which is best known for being covered by some band called Guns n Roses. In "Nice Boys" Anderson spins the tale of a young woman corrupted by the fast life of Rock n Roll. I don't remember AC/DC ever having the words "garbage," or "smack" in any of their songs. On the following cut "Butcher and Fast Eddie" we learn the tale of the meeting of two gang leaders, I won't spoil the ending for you, but it doesn't go well. For the duration of the album, Rose Tattoo continue to stomp through rudimentary blues rock while Angry reaffirms that he is an outlaw, a rebel, a rapscallion, an outcast, a fighter, and a lover, who divides his time between smoky bars and local jails. Pull up a stool, order a pint and let the wrong-side-of-the-tracks charm, and billiard hall wisdom of Angry Anderson and Rose Tattoo soothe what ails ya', mate.
Here
Posted by Aesop at 12:16 AM

I remembered an ad these dudes here in Perth put out, looking for a bassist to play in their Rose Tattoos cover band. "Must be experienced, have own gear, and covered completely in tattoos." I called them after they pulled the ad, wanted to see what happened, they hadn't been able to find anyone, so they split.

As a local, I fucking hate this band. Anderson is a hypocritical cunt who for 20 years has been synonymous with bad panel TV shows and reality TV. Recently he's been mouthing off politically and he's an embarrassingly middle of the road conservative fuckwit. Don't be fooled, the mighty ACDC were 100% more "real" than these no-talent dickheads.

First album i ever owned was Apetite for destruction, second was GnR Lies, was having my first blast of the latter when my brother burst in the room during Nice Boys, got that sickened snobs look on his face and insisted i hear the original, i thought it rocked but he wouldnt let me touch his precous vinyl, but he did make me a tape with this on one side and a Hanoi Rocks comp on the other, the 3rd and 4th albums i ever owned.
GNR didnt seem as cool after that.

haha yes!!!!!!! i first got into these guys through their song "we cant be beaten." good shit. love this band. thanks!!!

undeniable classic...except for the "their ugly" argument, so girls weren't buying their albums, i don't get why they weren't bigger than GNR. They definitely were better. RIP my uncle Rob for playing the hell out of this, Robin Trower, and Black Oak Arkansas for like 2 summers in a row.

Cheers for the run down memory lane. One of the first heavy bands I listened too as a youngster. Angry was certainly the gateway to heavier and darker tunes.

Ahhh, an old favorite... love the sleazy slide work on this album!

You didn't say anything about Angry Anderson being Ironbar Bassey in Thunderdome... that got me to check out Rose Tattoo... been a fan since. One good thing had to come out of that movie.

I've been listening to this a lot lately right before I go skate. Perfect for a session pumper or just cruisin' down the road, windows down stereo blastin' and T-tops out of your camaro/firebird (if applicable)

The sound has a satisfyingly brutal crunch, but the songs are always tight and catchy. Sure, you can hear AC/DC there, but I also get more than a hint of Slade, a UK band who always got a very warm welcome from the Aussie hard rock culture. Rose Tattoo got loads of local radio airplay in the UK during the NWOBHM era, which they seemed to fit right into, and I still remember most of the lyrics.

Turned on the TV a while ago to see Angry singing a Rose Tattoo number with a police band backing him up. That made me giggle. He also did a guest spot on local white power lovelies THUG's LP last yr.

Regardless, some of the early rose tattoo stuff is awesome. Shared members with X and Buffalo as well.

awesome! i was just thinking about them the other day! thnx ace!

Listen to this - and then try and reconcile it with what a clueless conservative cunt Angry Anderson is these days! Anyone in Europe or the U.S. who remembers him this way wouldn't believe what an arsehole he's become in Australia.

That is sad indeed. Let's just remember him this way then

It is sadly true that Angry has become a right-wing populist dickhead in recent years; has appeared on incredibly lame commercial tv reality shows and generally trashed his rock and roll bad-arse legacy. However this doesn't change the fact that the early original Rose Tattoo were pretty fucken rad and the other guys in the band were rocken too - unfortunately most of them are, I think, dead. Still the first couple of RT albums are sweet.

"As a local, I fucking hate this band. Anderson is a hypocritical cunt who for 20 years has been synonymous with bad panel TV shows and reality TV. Recently he's been mouthing off politically and he's an embarrassingly middle of the road conservative fuckwit. Don't be fooled, the mighty ACDC were 100% more "real" than these no-talent dickheads"

I agree he is a political fuckwit, 'Angry' these days is a tea party style reactionary but I love these fuckin tunes - gritty as hell

I remembered an ad these dudes here in Perth put out, looking for a bassist to play in their Rose Tattoos cover band. "Must be experienced, have own gear, and covered completely in tattoos."

I see your cover band story and raise you an actual Rose Tattoo one. A mate of mine tried out on drums for the band, was told he had the chops but not enough tatts!

Anyway, couldn't give a fuck about Angry's representation of himself in 2011. This album is great and 'Remedy' is one of the greatest Australian rock'n'roll tracks of all time. There is a recording of Bored! doing a cover of said track with Tim Hemensly on vocals. Amazing shit.

As much as I love Rose Tattoo, it's a shame that Angry has followed the same conservative path as so many white men over 40 yrs old. Still, this album kills. Props should also be given to the slide guitar mastery of Pete Wells (also a founding member of Buffalo, I believe). I even heard ol' Pete was George Thorogood's favorite contemporary player back in the day.

Rose Tattoo are farkin great. Who the fuck cares what his politics are. Does Ted Nugent's music suck because he's a right wing fuckwit?

Anyhoo, if you dig this, you need to get some Lobby Lloyd (and all his iterations) and Billy Thorpe & The Aztecs, who both were the genesis of Australian hard rock.