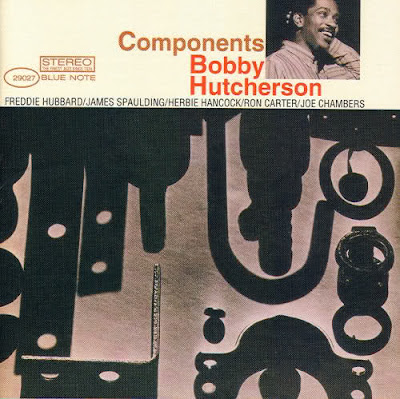 Components was vibraphonist Bobby Hutcherson's third date for Blue Note, and while almost all of Hutcherson's albums are brilliant, this one stands out. Released in 1965, the record is divided into two rather distinct parts: side one features some straight, albeit very interesting, hard bop compositions written by Hutcherson, while side two ventures into some strange avant territory with pieces composed by Joe Chambers. Almost needless to say, Components is a very percussive and dynamic affair made even more engaging by blistering performances by James Spaulding on sax, and Freddie Hubbard on trumpet. The album opens with the jumpy title track but is quickly cooled off by "Tranquility," which bears an intro that would make any post-rock band with a pretentious name clamor for a vibraphone and a pair of mallets during their next date. The lilty "Little B's Poem" is a perfect bed for some amazing solo work from Hutcherson as well as a staggering solo from Herbie Hancock. The ribald "West 22nd Theme" lopes and swaggers to a smoky gin joint back beat, another place, another interior, created by a top notch band and their instruments. Then, almost as if you have stepped out of that sleazy bar into the blinding light of another dimension, Chamber's side two compositions create an uneasy feeling of disorientation, and abject confusion, as if Rod Serling sequenced the album. The whole affair ends perfectly with "Pastoral," a beautiful number that wakes you from the restless and surreal dream of the previous three tracks and lets you know that you are okay. This trajectory gives Components a linear narrative, and a completeness that few records have. It is a journey through a myriad of landscapes, both soothing and spooky, with a tender resolve. Just amazing.
Here
Posted by Aesop at 12:13 AM

Just d/l'd this one and listening to CONFLICT right now...Freddie Hubbard and Herbie Hancock - class,not to mention the other players...I bought a stack of Herbie's '70's fusion (or whatever they call it) stuff recently...cosmic music and cosmic sleeve art too.Also,thanks for the Blood/Engraved/Citizens Arrest gear.I've owned KANGURU for a couple of decades.Great blog!

thanks for this. did you get the elvin jones live at the lighthouse link i sent?

Your jazz selections have been top notch lately.

Good one. I have a pile of Bobby Hutcherson records but not this one. Thanks.

A trail of jazz nuggets leading through a carpathian forest ...