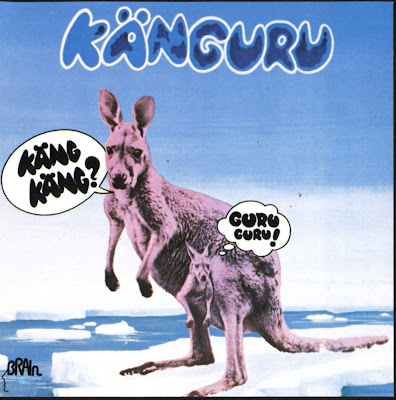 Guru Guru were one of the many young, talented bands that emerged from the Krautrock scene. Though not as known as CAN, Tangerine Dream, or Kraftwerk, Guru Guru's third album, Kanguru, is among one of the best releases of the genre. It's broken up into four lengthy sich-edelic mushroom jams that toggle between whimsical and menacing. Mani Neumeier's superior drumming drives the album, and that's also him doing that crazy singing. Guru Guru would invite Amon Duul over to their commune in the mountains of Bavaria and the two groups would ingest drugs, jam, and totally freak the fuck out together. Motherfuckers would run naked and free, tasting purple, shitting sunshine. It was a good time.
Here
Posted by Aesop at 12:00 AM

thanks for the link... I love there stuff but only have a few tracks from various Cleopatra "Space Rock" comps...

thanx bro!Had not heard of them before but when i saw the amon duul reference decided to check it.Great music!Greetings from Greece!Cheers.

this and UFO are my favorite of their releases...I had the honor of seeing Acid Mother Guru Guru with Mani on drums a few years ago, he fucking destroyed all and did a solo set in the middle of the show on what I can only describe as melodically-tuned bangles. One of the greatest musicians I've ever been in a room with.

Your blog has turned me on to some absolutely amazing stuff I'd never even heard of, and this is the latest example. Thanks for sharing your wide-ranging interests with us; I've gotten quite the musical education thanks to your blog.

incredible album complete with 'we don't give a fuck' artwork. Immer Lustig is a masterpiece. maybe some Electric Sandwich is in order too?

was half hoping this would be a bizarre kang album

Joint fave with 'Hinten'. Shame they went all fusiony later on.

Yes-
The Hearse is back!I have to listen to a few of these albums you have uploaded but thanks a million for the Guru Guru post- a sorely underrrated band. I will listen loudest!

Never really listened to any krautrock, outside of Ash Ra Temple. Listened to this stoned. Was good.

sweet. the only stuff i have of theirs is Der LSD March. this one is top-notch.