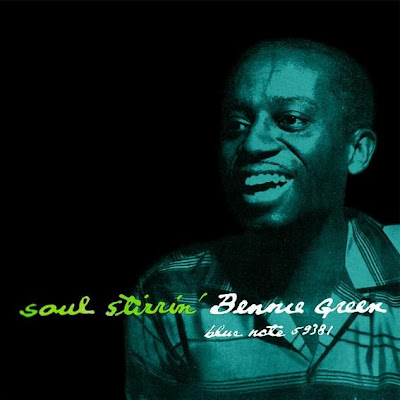 Trombones, at one point, fell out fashion in Jazz. Many held the belief that instruments without valves or keys wouldn't be able to navigate some of the more technical fast runs and solos. This didn't seem to matter much to the affable Bennie Green. Between 1951 and 1961 Green released sixteen albums as a leader. Soul Stirrin' (1958) was his ninth album and his second for Blue Note (his first, Back on the Scene was released earlier the same year.) While I like almost all of Green's output that I have heard, Soul Stirrin' has a few thoroughly amazing moments that put it above the others. The album opens with the bawdy swagger of the title piece. Green's band and Babs Gonzales (who wrote the number) deliver a soulful group vocal before the real stirrin' begins. Green is accompanied by the amazing Gene Ammons on tenor sax, and the top notch rhythm section of Sonny Clark, Ike Isaacs, and Elvin Jones. On the second track the band declares quite vocally that they want to cook, and cook they do and Green shatters the myth about what trombones can and can't do. After a sultry rendition of the Brandt/Haymes standard, "That's All," the band delivers the album's centerpiece, one of the bleakest Jazz numbers of all time, the Babs Gonzales original "Lullaby of the Doomed." If ever there was song to drink yourself to death to it is this mournful moper. In the home stretch, Green lightens the mood with "B.G.'s Mambo" and "Black Pearl." Soul Stirrin' is a complete experience, an album with flawless sequence and trajectory. It starts sort of raucous, gets introspective and drunk in the middle, and ends upbeat and playful. It's a journey that stirs your soul.
Here
Posted by Aesop at 12:02 AM

Goddamn!
Every Jazz record you post is Amazing.
Cheers to you sir.

Wow... There's another Blue Note I never heard. Okay, you've proven your point, I have no idea WHY I ignored Blue Note. I no longer will. Thanks for sharing.

Do you have any Nigel Peppercock albums?

Despite my having what many would consider a large collection of vinyl and Cds,you have an impressive track record of posting stuff I don't own. You and I could definatly hang out.

thanks so much - great record i never heard of.

i love to take the jazz records you post and play the tracks in order, back and forth with the same track off the most recent metal record you posted.