Point Me To The End 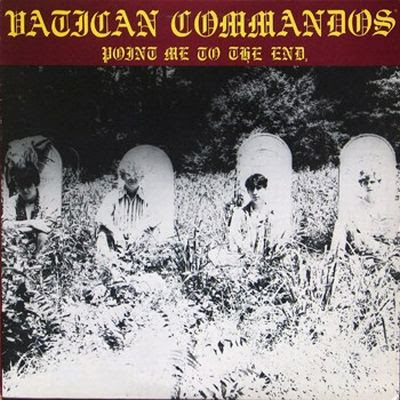 The Vatican Commandos were a punk band from Connecticut that had among their ranks a guy who would later call himslef Moby and make albums for people who don't really like music but enjoy buying things. Vatican Commandos released a couple of so-so 7" eps and appeared on a couple of compilations before releasing their best, and final statement, 1984's Point Me To The End. The album's mood suggests a veteran hardcore band facing adulthood and becoming bored with the usual trappings and limitations of the genre. The songs often have involved instrumental intros that launch into chunky mid-tempo numbers with more melody than their older eps. The album definitely sounds like a band facing the end, but without regret or embarrassment, just a sort of somber farewell to youth and hardcore. Kind of reminds me of JFA's Mad Garden for that very reason
Here
Posted by Aesop at 12:10 AM

That Moby guy is from Connecticut? Well that fucking figures. We hardly produce anything cool.

"make albums for people who don't really like music but enjoy buying things."
I laughed and laughed at this. That said, I do still love Moby's Everything Is Wrong. Good times. Good memories.
Thanks for this. Your blog remains absolutely essential.

Awesome album. I'm sitting in Darien right now, and have this album on vinyl. Saw them live at UConn back in the day, including Earl's poetry recital.

"Where is my hunger?" This is an awesome memory trip.