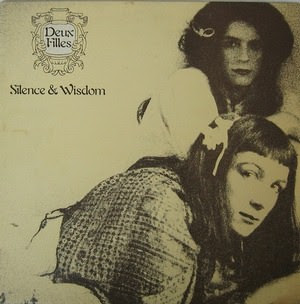 This bit of unhinged genius from 1983 comes courtesy of Deux Filles from London. The two girls are actually Simon Turner and Colin Lloyd-Tucker.Simon later made a name for himself as a founding member of The The. Deux Filles' first album was called Silence and Wisdom and it is a fucking creepy little record that should not be ignored. I guess maybe Cocteau Twins and some of Current 93's work might come to mind, but Deux Filles cover much more territory without really ever doing too much. There are minimalist drones, and creepy EVP voices, foreign tongues and delicate acoustic guitars. There are somber keyboard drifts and shimmery dreamtime guitar delays. There are children's voices and fluttery butterfly winged pianos. There are distant echos and throbbing pulses. All these elements conspire and convene to create a wholly beautiful and encompassing listen. I can't recommend this enough.
Here
Posted by Aesop at 1:06 AM

I shall take your word for it. The review king of think sounds good.

This looks awesome. Can't wait to give it a download once I get home from work.

ok,that took all of 20 seconds to know this was going to be good. Steve Wilson/Bass Communion rated this very highly but I never got around to checking it out. Thank you as always! -jabladav

oh my god ! I can't believe it ! thank you and be blessed for the 4 next generations !

Sounds immense, can't wait to give it a listen

With a description like that, it's impossible not to dl. Thanks.

not sure what i think on this...