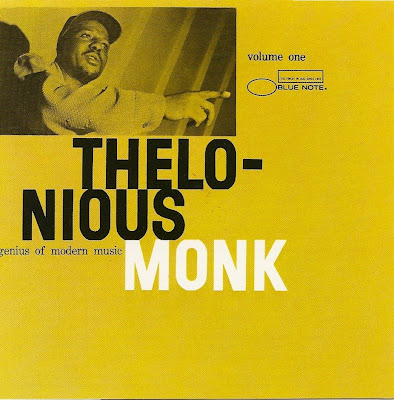 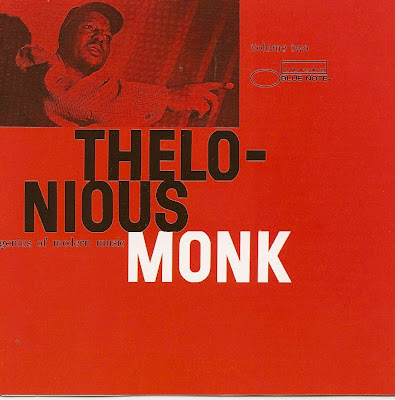 Betweent 1947 and 1952 Blue Note dates at WOR studios in New York City with pianist Thelonius Monk. Many of Alfred Lion's close associates scoffed at this, and urged the Blue Note founder to release more records by the more technically proficient and better known Bud Powell, citing the labels shaky financial situation as reason enough for doing so. Alfred didn't care, the sheer joy he felt in hearing every new Monk composition firmed his resolve to get as much as he could on tape, and he was also painfully aware of Bud's worsening mental health. At the time, Monk wasn't thought of as being skilled enough to lead or compose, but Lion believed in the strength of the material, and painstakingly selected the perfect musicians to see it through. Perhaps the best choice was the use of a young Art Blakey. Blakey's ham fisted clank worked perfectly with the oddball nature of Monk's pieces. Various horn players were used to varying effects, and on at least one session in 1948 features a young Milt Jackson on vibes, some of this session was released as Jackson's own Wizard of the Vibes record later on. Their is a certain clumsy looseness and wet-behind-the-ears slop with the players involved that compliment these strange songs perfectly. The best of these sessions were released as 78 rpm singles, but later were compiled many times over and packaged anew with the recurring title, Genius of Modern Music. This edition works perfectly as a primer into one of the most original musical minds of the twentieth century and easily one of the greatest American composers to ever arrange mysterious black dots onto staff paper. You get perhaps the best version of "'Round Midnight" recorded ( and there have been over a thousand renditions,) as well as Monk staples like "Epistrophy," "Misterioso," and "Straight, No Chaser" as well as plenty more eccentric charmers. Longtime fans can move along, but for the uninitiated who may have been intimidated by the numerous releases bearing his name, this is a fantastic way to discover the genius that was Monk.
Genius One
Genius Two
Posted by Aesop at 12:06 AM

Caligari:
one of the best recordings
by the monk! great.
i really appreciate
posting both jazz and metal.
go on!

thanx!monk and sonny rollins' saxophone collosus was my gateway to the world of jazz.Cheers!

One time I was commenting at the Cosmic Hearse and this fucking huge spider walked up by the mouse. It was probably as big around as one of those black ashtrays for many smokers. The color was so beautiful on it and I thought it might fuck me up if I tried to smash it so I let it go.

I've got to second alex there, the pop sensibilities of monk's arrangements coupled with his oddball harmony was my first taste of jazz that had me back for more and more. Right around the same time Rollins Freedom Suite was having the same effect on my youthfully uninitiated mind.

Anyone who describes Blakey's playing as ham fisted has a truly original perspective on jazz and deserves praise for it! genius

I've downloadaed a few of these jazz offerings. So far I think "The Shape of Jazz To Come" has been my fave, but am still digesting "Out to lunch", thanks also for "Lifetime"; mindbending that one.

My wife won't let me name our final son-to-be Thelonious. Ain't that a bitch?!

Play her these records and she might. I think Thelonius Brabado is a fine name.

I learned some of his music in jazz ensemble back in Florida. I'll pull it out from time to time to drive my band mates crazy. Once I heard a bus in Oakland with a busted warning horn as it pulled to a stop. It played out of time and I swear it was playing the opening melody to the song Well You Needn't. Monk's amazing, but don't go doing heavy metal renditions of his music or I will vomit. Aside from Iceburn I can't handle any jazz metal. I like my jazz Straight, No Chaser.

Anyone have the password for these zip files? Please.

I used 7-Zip to unzip these files and it does not ask for a password, but for some reason the windows xp default unzip tool does.

I really dig the mix of music on here. Jazz is one of the frontiers I haven't ventured into that far. It's time to start correcting that. Thanks.

Great post. Curious what is your favorite Monk album? Hard to pin down one. Misterioso and Brilliant Corners I can listen to on loop.

Thanks for this! Excellent.