A Ceremony of Hate in Six Parts 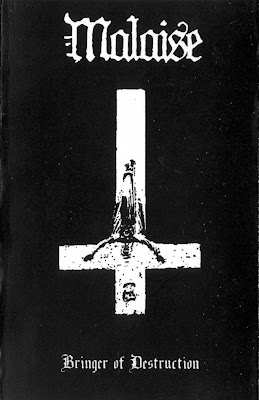 Bringer of Destruction, the singular release from a mysterious, uncredited Quebec band called Malaise. It was released in 2005. The program here is raw, repetitive, lo-fi Black Metal akin to countrymen Akitsa's more abrasive work. I know it isn't exactly Malaise's intent, but I find some of the repetition hypnotic and soothing, especially around the middle of the program. Also noteworthy that this was limited to a scant twenty copies, and while I appreciate the kvltitude of such an endeavor I also wonder what is the point.
Hate
Posted by Aesop at 12:17 AM

Ah oui! More no-fi, impossibly obscure kvit...this is why, among other reason, I love the Hearse. Thanks again Aesop!

WTF 20 copies? That is too kvlt to pass up. The recent posts are on fire. Thanks for the hook.

That reminds me of my idea for a Troo Kvlt release.

20 cassettes, 19 of which are ritually burned before release, and the last one mailed to a random person picked from the phone book.

(Inspired by all those ludicrous vinyl-only limited releases that sell out before I even hear of them - not that I'd buy a piece of rotating vinyl anyway.

A ceremony of hate divided in 6 parts. Fuck Human Life. A celebration of hate in its most primitive form.