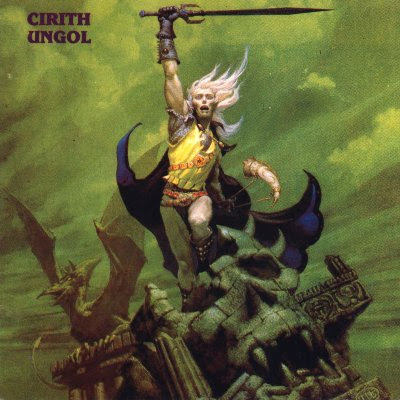 With their name culled from the pages of J.R.R. Tolkein, and their cover art (by Michael Whelan) with images from Michael Moorcock's Elric of Melniboné series, Cirith Ungol could be a nerd's dream band. When their debut album, Frost And Fire, was released way back in '81 it was met with derision and scorn by the critics and magazines, most likely the same folks who, today, call it a "masterpiece" or "a forward-thinking metallic milestone," you know how writers are. Upon first listen it's somewhat easy to see why people didn't get it the first time, it's clunky and awkwardly performed, and compared to something as great as say, Iron Maiden's Killers, released the same year, it seems even more so. But fuck that shit, Cirith Ungol weren't Maiden, and weren't trying to be. Cirith Ungol were American Heavy Metal, Southern Cali stoners with an obvious love of all things NWOBHM and '70s hard rock. Tim Baker's voice brims with a naive enthusiasm as he sings lyrics like "I got My Rock n' Roll Haircut, I got my Rock n' Roll Jeans" which brings to mind Saint Vitus' "Born Too Late," another anthem for the burnout throwback kicking and screaming into the slick and rather soulless '80s. Only the title track speaks of the fantasy themes suggested by the band's name and cover imagery. The rest of the songs seem to be about working class angst and frustration (again like Vitus.) Producer Randall Jackson (pictured in the liners looking like Barry Gibb complete with gold chains resting on a bed of chest hair) captured the vibe of Cirith Ungol perfectly with a dry upfront sound. Perhaps the metal press of the day couldn't wrap their heads around anything so honest yet so flawed. The standard of the time seemed to be an emphasis on musical ability over passion, and Cirith Ungol were just too strange, too real. Now Cirith Ungol enjoys the posthumous success afforded to only the most cult of cult bands. The term "cult band" here means that nobody gave a fuck when they were around, people even hated them, but now everyone claims to have been on board since the beginning. Such was the case with Pentagram, Saint Vitus, and now, Cirith Ungol. But I think it's never too late to discover a great album, and I believe their are so many albums that deserve another listen years later, and Frost and Fire is a perfect candidate. Here
Posted by Aesop at 12:05 AM

i was one of those kids who said "what the fuck is this shit"
but then again i said that the first time i heard Voi Vod's 'War and Pain' shows u how much i knew at 15, i'm gonna grab this soon as i get home tonight

man first Manilla Road and now some Cirith Ungol. I'm 26 so I was in diapers when this stuff originally came out but these old US metal bands are some of my favorites. Maybe some rare Omen or Brocas Helm next perhaps? That new Manilla Road album Voyager is pretty sweet too. Got it in the mail yesterday and gave it two spins so far, quite good!

Well, I'm not that big on Omen, but some Brocas Helm would be sweet. Thanks for the word on the new Manilla Road, I had been wondering. I think their newer stuff is hit and miss but I'll check it out. Manilla Road, Cirith Ungol, and Saint Vitus always seemd criminally underated to me, but I guess that's changing. Have you heard of Slough Feg, Vulgenox? You would do wise to check them out, especially the "Twilight of the Idols" album, great traditional metal from San Francisco (my hometown)

Slough Feg yes. Them, Hammers of Misfortune, Crescent Shield and Upwards of Endtime are my favorite current traditional metal bands (even though HoM has more of an expansive sound). I am pretty miffed that I missed Slough Feg recently when they came here to NYC on tour. Then I see their current tour doesn't take all the way east. Argh! I'm sure I'll catch them live again eventually

There will be a new Hammers of Misfortune double LP of new material released this year sometime.
Don't worry about missing Slough Feg, they tour constantly and will come back.

yes! I'm very much looking forward to that new Hammers double album when it arrives. Profound Lore is a very cool label and a good home for them. Maybe I also will finally have a chance to see them live.

Fuuuuuuck Yeah! Spread the Ungol love!!! Some of the best album covers, especially King of the Dead!!!

I am going to a comics convention in Portland and am going to visit friends... and also see Slough Feg (I miss the Lord Weird!). Could I ask for a more perfect trip?

well this wasn´t love on first hearing , but now i return to it again . my fave is still their final album paradise lost - harry lime

I remembered being entranced by these albums covers when they came out, as at the time I was a huge Elric fan and those paperback covers where about the coolest thing ever. Blown up to LP size is amazing. But I actually never listened to the band until last year! A sad loss for me...

But now? Frost and Fire is a great album, but I think that King of the Dead (with the best album cover of them all, the awesome title track and the equally awesome Black Machine) is it's equal... In fact, maybe One Foot in Hell is too, as it contains 100 MPH and Doomed Planet. Hell yes, just get them all! Those three albums remain the Vinyl most lacking from my collection...

This kicks ass. Im hearing Aerosmith. Which is a good thing.

Thanks Aesop...I just discovered "One Foot In Hell" after years of ignorance. I am sure that I will love "Frost and Fire" as well.

I fucking love this band!!
In the 80s I use to order tapes from Creem and Hit Parader ads. Cirith Ungol, Saint Vitus first couple of tapes, Grim Reaper's 1rst tape,
and Fates Warning's Omni-Epic "Awaken the guardian" I remember ordering and waiting for weeks for them to show up in the mailbox. However the amazing impact they would have on me when they would arrive deinatly carved my foundation for what I liked in metal music. Those were some inspired discoveries and listening moments. Taking long walks out in the woods blasting these tapes. Serious music buzz.

Thanks for covering this record. This is some of my holy grail man.

Nice to have you comment here, Smitty. Keep checking the archives.

Cool, This makes me feel like I'm 16 again. Rocking the Denim jacket and the fierce metal mullet (hey it was the mid 80's heh). Thanks Man. You truly ROCK!

thank you for opening my eyes to this gem! i missed it the first time around probably cause i was listening to iron maiden.

downloaded this from the sire forever ago and today was the first time I listened start to finish. really fucking good for all the reasons stated in your writeup. thanks.