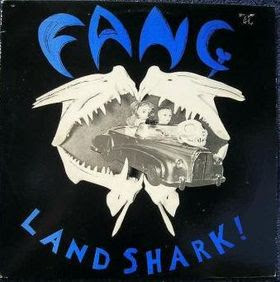 By now everyone should know the sordid history of Sammytown and his band of self-proclaimed "Berkeley heathen scum," better known as Fang. Everyone knows about how Sammytown murdered his girlfriend, Dixie, over some missing money. Drugs, murder, prison. All very interesting indeed but Fang's first release, 1983's, Landshark is a thousand times more unsavory and fascinating to me. Fang presented themselves as terrifyingly fucked up individuals, junkies, rapists, and even werewolves. The album kicks off with The Money Will Roll Right In, where Sammy declares "I won't care how I feel, and I'll get to fuck Brooke Shields." Then Fang launches into the title track which, as it would seem, is about a car. Law & Order is a typically slunky Fang number with portentious lyrics about the penal system. Sammy intones monotonously, "My mother was a junkie, my father was a faggot. I grew up in the Tenderloin where the streets are filled with maggots." The Tenderloin he speaks of is a particularly seedy part of San Francisco, I used to live there. Most intriguing is the track "An Invitation," in which the listener is urged to join Sammytown in his dark world of sex and suicide. In a sultry croon, Sammytown sings, "In the corner I see you there wired to an electric chair. I run over and jump in your lap. They throw the switch and everything turns black." I imagine that French surrealist philosopher, Georges Bataille, who wrote many essays on the relationship between sensuality and death, would have had a field day with the prose of Fang's enigmatic frontman. Landshark closes with the rousing singalong Skinheads Smoke Dope, and that, according to Fang, "ain't no fucking joke." The follow-up to Landshark, Where The Wild Things Are, is an equally disturbing affair. Fang went on to make two more forgettable albums before Sammytown's incarceration, Spun Helga and A Mi Ga Sfafas (Yugoslavian for "Give Me Head") Upon his release Sammytown reformed Fang with an all new line-up and recorded an album titled American Nightmare. This incarnation of Fang still gigs around the Bay Area and features former members of Crucifix and Oppressed Logic. Fang were special, they were real, and they solidified the notion that rock is supposed to be dangerous and is best left to bad people. Landshark was the world's introduction to the twisted psyche of an outlaw named Sammytown and that alone makes it significant.
Here
Posted by Aesop at 12:57 AM

this is one of the best punk records ever. fang is an all time favorite of mine. great post

Oh fuck, this is great! This is the kind of SF Bay punk I've been trying to find since I first heard Negative Trend. I've heard one other Fang track, on a comp tape someone made me about 10 years ago, but I never did track down anything else by them.

Thanks for the upload!

My ex-wife married for the fact that when she met me I had this record hanging on my wall.

Been digging your blog for a while now, always great writing from you.

Thanks, I am a fan of your site as well.

I had this Ex girlfriend who was a friend of sammy's murdered girlfriend. I had known her too for a short period of time in Charlotte North Carolina.
im not for murder or anything but if there was ever someone who annoyed me enough to wish a casual murder thought on it was this woman.
As it happened she was a drug dealer and had supplied my ex.
well when she got murdered they played it on one of those true crime tv shows all the time. THey would pull out her fat mother who had plenty of photos of her at 14 which they would show.
I got a big laugh out of it when i remembered what that she looked like the cover of teen hooker magazine during the period they were discussing.

maybe i was more acid damaged than them but when they came to our party in dorchester mass after a gig they rocked the basement. real people. the asian guy ( forget whether he played bass or guitar) showed me the right way to play "invitatation ' and of course I love the song about "the helicopter are coming" from that cali complilation from 81/82

my girlfriend and i used to chorus along with sammy when he'd sing 'law and order'..'My mother was a junkie..etc. etc. we'd go, 'My mother was a housewife, my father was a college professor, I grew up in North Berkeley where the streets are filled with Volvos(?)", and we'd laugh.
That was 25 years ago? Now when I hear "They called me a murderer they called me a junkie!" well, dear, you ARE a murderer and you were a junkie, but so were lots of us.
Fang had an easygoing way about them, sorta like the Butthole Surfers, or Flipper on some days. They were local. Sam once showed me some words he'd written after spending the night with me.
They ended up being 'Severed By War'.
Never could call that one.