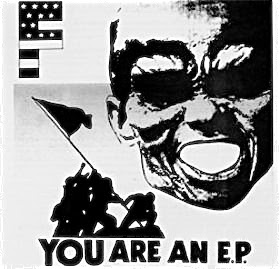 The story of the two bands that existed in South Florida in the '80s using the obscure moniker of "F" is a confusing one at best, but I will attempt to explain as best as I can. In the late '70s a single band called F surfaced, contributing a track to the Land That Time Forgot compilation LP. This lineup consisted of an enigmatic frontman named Flash as well as guitarist Mike Hasson and drummer Pete Moss. Ken "Duke" Decter may or may have not also been in this early F incarnation, I just don't know. Anyways, around 1983 another band, a hardcore band called F released a fantastic blistering 12" ep called You Are An EP What was even more confounding was the fact that the ep had at least 3 songs that had been penned by the original F back in the '70s. The only real connection between the old and new F was Mike Hasson, who now went by the extremely tough nickname of "Ravenous" and was now playing drums rather than guitar. Then as if to further confuse anyone who cared, Flash returned to the fold with a new band called, you guessed it, F. Flash's F was a more Dead Boys type deal that did many of the same songs as the previous two Fs. There appeared to be no animosity between the two concurrent Fs, in fact, Mike "Ravenous" Hasson even lent his guitar playing to the Flash-led F's great cassette releases The Danger is Here and Destruction Ahead. Both bands (but especially the hardcore F) seem to revel in the ensuing confusion. Flash's F still exists today and has even released a new album, Raw Bones, contact them here. The hardcore F gained much more notoriety contributing the best track to the Flipside Vinyl Fanzine compilation and doing a split LP with California's White Flag. As much attention as this F received for their brand of raging angry hardcore, they were mainly known for their antics which included a mock right wing pro-Reagan stance, baiting skinheads, and calling the cops to bust their own gigs. F was fond of inverting the principles that most punks considered sacred. F challenged everyone's sense of humor and held a mirror up to many of the ridiculous axioms of punk at the time, all the while kicking your ass with some furious noise. Members of this F also did stints in seminal Florida punk bands, The Gay Cowboys In Bondage, and Disorderly Conduct. You Are an Ep is as vicious and hostile a hardcore record as any other, and has become a bit of a holy grail for collectors worldwide. The committed Florida-based label, Burrito Records has made music by both Fs available through a couple of great reissue 7"s. Now you know as much as anyone about F.
Download You are an Ep
Posted by Aesop at 6:24 AM

After reading about F I wanna hear the music, but I also wanna hear more about the stories. You should have some kind of podcast too. You know way too much about good weird ass bands to not have a podcast once in a while.

I have considered such, but the blog, 2 bands, a kid, and a job keep me pretty busy for now. Thanks for reading and commenting.

holy whoa.
i forgot about them.
thanks for the reminder!

I have their EP "Die your stupid Hippies , Die you fucking suck"

FYI Ken wasn't in the early F, Bruce Beast was the bassist (see new 7" ep on Burrito records called "4 from 84"). I was in a band in high school with Flash, Hasson, and Moss called Chaos.I also did bass for F in the late '80s.

Ahhh, yes. Any chance of sharing some Chaos stuff, Lou? For those of you who don't know, Lou has a great blog archiving the best and most rare South Florida punk recordings. Check It Out!!!!