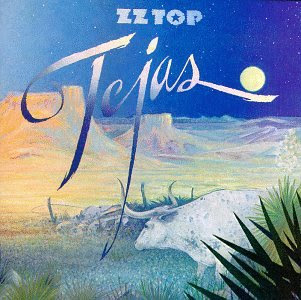 The fifth and final installment of the ZZ Top vinyl rips comes to us courtesy of Cosmic Hearse passenger, Deege Dunford, who painstakingly ripped this. Much appreciation goes to Mr. Dunford for taking the initiative and sharing with our dear readers. The following notes come from Deege himself...
These are all the original mixes of the classic '70s ZZ Top catalog.For those of you not familiar with the history of these recordings:Before 1987, ZZ Top's first 7 albums were not released on CD format. So, in 1987, to capitalize on the success of the synth and drum machine
laden sound of Eliminator and Afterburner, Warner Bros Records convinced the band to go back into the studio and remix the back catalog, in order to release a 3-disc compilation of six albums, called Six Pack .These new mixes were terrible - gone was the rawness of what made classic ZZ Top what it was replaced instead with fake, annoying sounding drums and drowned in a sea of cavernous reverb. Some vocal lines and guitar parts were even re-recorded or alternate takes were used, and a few songs were even shortened, so that two albums worth of material could be jammed onto one disc. Fortunately, the band's sixth album, 1979's Degüello was spared this treatment, due to a dispute with Elmore James' estate, over the lisencing of the cover song Dust My Broom. This album was left off of the six pack, and replaced with the band's seventh album El Loco. After the dispute was settled, Degüello was eventually released on CD with it's original mix. In 2003 a 4 CD box set Chome, Smoke & BBQ was released, which contained an abundance of theseclassic '70s recordings remastered in their original mixes for the first time on CD. In 2006, the band's albums Tres Hombres and Fandango! were also remastered and re-released in their original mixes as well. As of yet, ZZ Top's First Album, Rio Grande Mud, Tejas, and El Loco have still not been released in their original mix. In my attempt to finally be able to listen to these albums they were originally meant to sound, on CD, I have spent the last few days compiling the best versions available of these albums in order to make these original versions available to anyone else whose ears were offended by the terrible '80s butchering of these classic albums. Included for download are the 2006 remasters of Tres Hombres and Fandango (live bonus tracks not included, as I wanted the albums to be as originally intended). For these other 3 albums, I have included all of the Chrome, Smoke & BBQ remasters, and for the songs on each album that were not included on the box set, I used versions ripped from the original vinyl albums. In order to make these vinyl rips sound as close to the 2003 Box Set remasters as possible,
I have used the Steinberg FreeFilter Direct-X plugin in order to get an EQ profile of both the CD sourced tracks, and the vinyl tracks - and then the program automatically applies the EQ profile of the remastered tracks to the vinyl tracks. I then used the Waves L2 Limiter in order to make the vinyl sourced tracks the same volume as the CD sourced tracks. In the case of Backdoor Love Affair from ZZ Top's First Album, I used the CD version from 1977's Greatest Hits, as it was released with it's original mix. Surprisingly, it's pretty difficult to tell the difference between the CD sourced material and the vinyl sourced material, and we are finally album to hear these albums as originally intended.
Unfortunatly, I have been unable to find a vinyl rip of 1981's El Loco, so that album is not included here. I am a bigger fan of the band's '70s output anyway, so I am not too worried about El Loco at this point anyway.
Here
Posted by Aesop at 12:32 AM

This is by far the radest ZZ top you've posted so far. Holly shit! So much better and that other stuff was great!

Wow!!! Thanks for going through all that trouble. I never really knew all that much about ZZ Top, but hearing about this remastering debacle sounds like a metaphor for the way our world is headed.

Now that MP3s are what everyone is listening to, producers are just amping everything to make the song really loud on "shuffle"

DVD remasters often over-saturate the color or completely replace it. They thin lines on animation and adjust the black in black and white movies to the point that it loses pictures.

If something has been popular for, say 30 some years, whose bright idea is it to do this shit?

Hats off for this informative offering and for standing up against this shitty world and saying "FUCK YOU."

I feel a Twisted Sister song coming on so I'm going to bow out gracefully at this point.

jeezum 'slop, you are a fucking nerd.

I never really heard much of ZZ Tops earlier 70s material before starting to read this blog on a regular basis but recently they've become quite a staple of my driving music of choice. Already they're not far from Blue Oyster Cult who've always been my favorite 70s rockers.

Snappy Kakkie has got the raddest beat.

Indeed. Tejas is a wealth of awesome breakbeats.

Im getting good at missing her! I practice all the time! This is a fucking Hickey song.

Well, this album WAS a staple in our van on tour, makes sense.

Man, I've been digging your blog for a while and just now stumbled across this vein of gold. I love ZZ Top. LOVE them. So glad to see them getting the respect they deserve. I picked up the Chrome Boxset and while it had the original mixes of their 70's stuff, it only has "selected" songs. So finding a digital copy of the original "Move Me On Down the Line" along with all the others is great. THANK YOU.

thank you, thank you for recognizing the genius of this band. ive never heard tejas but spin riogrande mud and tres hombres constantly....

Thanx for the magnificent zz top posts -I was fortunate to see them on their Deguello tour in 1980;
I agree that the remixes are horrible-thanks again!

Thank you for this! I've been waiting for First, Rio and Tejas without all the stupid remix crap for years!

Thank you so much for those LP original mixes, I've been searching for it a long time!

I drank gallons of beer and smoked tons of pot with my redneck friends in high school listening to these. The reverb in the official remasters suck. Thanks so much. I'm trashing my pirated Six Pack mp3s and replacing with these. God luv ya.

I am so fucking glad you put this zz top original vinyl mix style up here. I totally gave up on trying to find it on soulseek because I knew it was just going to sound like total ass. took me too long to realize you'd done done it, but it's all good now.

also, I recently started jammin' on the dr dre del shit after hearing it riding around with morgan some months ago & figure now would be a good time to commend you on the usage of the bridge in "it's only love" as the beat for "dr dre del gets all up in your momma". or, maybe that was more of a move on queenie's part? regardless, one of many rock jams that had what I consider to be a perfect hip-hop beat.

Thanks for all the care and hard work on this and the blog in general. top notch. Good to see ZZ top getting some effort.

Big thanks for posting the 70's ZZ Top.
What insanity indeed, those new mixes.

I believe that the drums on the "remasters" are actually DRUM MACHINE used in order to not pay Frank Beard royalties. Probably the single-most colossal tragedy in recording history, seriously. That man swings more with his left hand how most men would kill to do with two...

I'm playing in a heavy blues project with another guitarist of late, and we decided to call it "Nasty Dogs and Funky Kings." We do Cream, Hendrix, Pentagram, Blue Cheer, early Tull and and of course, Top. This made my week.

only saw this post now!!! (better late than never!).
i had the LPs at the time, plus (at the early CD age) the infamous & horrendous "Sixpack"! (what a pile of shit!).
now, that's good news! i take the lot! BIG THANKS

I also wanted to let you know I found a vinyl rip of El Loco, in case you were interested.

Thank you Cosmic Hearse and Deege. Now I have a reason to smoke a number on the hood of my old dodge next to a cactus.

Awesome! :-) I'm so happy someone actually decided to return the sound of the classic ZZ! It's a cool thing they reissued 'Tres Hombres' and 'Fandango!' as they were, and now we can enjoy the other three albums the way they should be enjoyed!

On a side note: apparently, 'El Loco' was not remixed for the reissue. It retained its original mix, which can be heard by comparing the drum sound of 'El Loco' to the rest of the 'Sixpack' albums ...

Thank you! I just started getting on a huge ZZ Top kick and bought a bunch of old LPs only to soon discover the remaster tragedy when I went to play "It's Only Love" in a bar and nearly spitting my drink out in shocked confusion and anger when this weird cold robotic 80's wreaking Phil Collins type drum sound blasted out of the speakers. "Something, something is WRONG!" I exclaimed. Now I can be at ease knowing that this album won't rot away. Thanks a shit ton!

Any chance of reposting these since Megaupload is now gone??