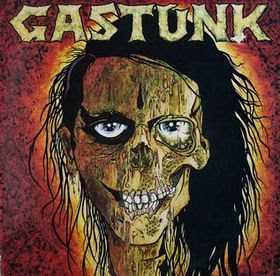 Gastunk are often associated with Japan's fertile hardcore scene of the '80s which I always found a bit strange seeing how sonically speaking they seem to be a rather commercial and slick sounding metal band. Under The Sun, Gastunk's 1987 album, is the band's most polished venture. While critics and fans deemed Under The Sun to be a disappointment compared to the debut, Deadsong, I am rather fond of it. Gastunk's metal really can't be compared to any other. Though they sometimes play rather up-tempo, they aren't thrash, and even with the presence of fast picking and screaming solos they aren't quite traditional power metal either. The vocals are rather heartfelt and melodramatic.Under The Sun is an adventurous album with epic arrangements, incorporating a myriad of different genres into its metallic stew. At times the experiment falls short of the mark, and can come off as corny, but it's Gastunk, and Gastunk is RULE!! Plus you get a cool full-color Pushead cover.Here
Posted by Aesop at 2:14 AM

a japanese band ? pushead cover ? can it get any better ? harry lime

I got this at a fucking Wal-Mart in Oklahoma for75 cents,brand new on vinyl. It was in some kind of cut out bin for LPs since cds were taking over..

I actually think they got far more polished in later years, but UNDER THE SUN is awesome. though it is true indeed that after DEADSONG, perhaps anything short of valhalla might seem a bit disappointing.