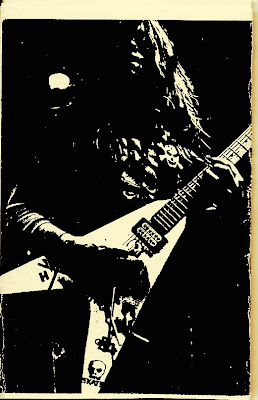 Don't know where the fuck I got this tape and can't find a stitch of information about these guys on the interwebs. From what I can gather from the the tape itself, D.I.E. (which apparently stands for Death Inevitable?) were from New York and played thrash/proto-death metal from 1988 to 1992. This tape, Death In The '90s is a posthumous retrospective/best of type of deal. It compiles tracks from D.I.E.'s 1992 Choose Death demo, a live show from '92, and the 1990 demo, Eternal Damnation. Weird that a band that existed for four years and released two punishing demos yields no results from a Google search. If anybody has more info on this band, let me know. Maybe you used to skate with these dudes, perhaps your brother went to high school with bassist, Nunzio Incorvia's sister. Maybe your old band, Attacker NY (plain old Attacker was taken), got your asses handed to you by Death Inevitable at battle of the bands that was really just some scummy promoter's scam to get you dumbasses to sell tickets to his club and play for free. Who knows?
Here
Posted by Aesop at 12:00 AM

dude, I am a loser for not knowing about your blog. jason and Don told me about it over the weekend. I have alot to catch up on. Excellent shit man!

Nice to see you here, Nick. Enjoy the rock.

Wow, cool. Thanks Aesop, will see if I can dig something on these guys in my circle of music geeks.

You guys should come play Montreal one of these days, we LOVE Ludicra here.

I know we're kinda far and it's winter now...

ya'll ever hear of a band from the mid/late 80's from the NY area called Black Vomit? At least that is what i think they were called. I had the demo way back when minus any type of cover and it was some killer crossover type shit and i've never been able to find another copy or anything about them... of course i may have the band name wrong so....

I only know of a Mexican Black Vomit (circa 1992) who obviously took the name from the Sarcofago song of the same name.

shit, wish i could remember...

Devil Dick-any chance you were thinking of BLACK TASK?

Jeez. I'm downloading this based on desription alone. Thanks.