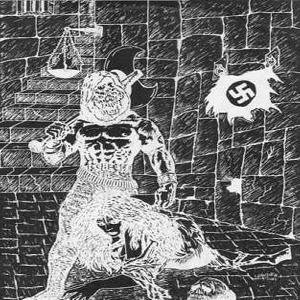 Exterminator were another hyper-extreme proto-Black/Death cult band from Brazil. Their bassist (credited on this album as Freddy Krueger) went on to be a member of Sextrash. Exterminator's only release was the poorly produced Total Extermination LP. So bad is this recording that it's impossible to discern what's going on, so this may only be of interest to those who froth over the no-fi offerings of the Cosmic Hearse or those completists who absolutely crave all things Brazilian, satanic, and weird. Seriously, this makes Sarcofago's I.N.R.I. seem like Yes' Fragile in comparison. I also want to add these guys had no political agenda, the swastika is just there to ruffle feathers ala Holocausto, and my isn't it shocking?
Here
Posted by Aesop at 12:00 AM

truth be told: you were also the 1st person I came across using the word "fucktard" so I guess it is just fair to give you the credits!

I have one - "asshermit". Made it myself. For use on special occasions.

My new favorite record. Thanks. Is this from the original LP or the reissue?

I really don't know. It was given to me by a friend on a CDR of amazing, rare early South American black metal. I know this has seen a couple of bootlegs.

I remember downloading this ages ago and I thought it was horrible. :D Perhaps I'll give it a listen again, maybe I'll like it this time.

No, Burek, It's still horrible.

Funny fact, that one member of Exterminator then become the world-known scientist.

It seems the most disgusting album of brazilian black\death\thrash underground of 80's.

Still remember how I listen it for the first time.
"What the fuck is going on?!" - was my first thought.

To sum up - that's perfect choice for collectors of 80's BM underground. Throw out your copy of "Deathcrush" and buy bootleg of this necroshit.

no, this really is useless. If you want to buy bootleg of necroshit it should be the Necrofago demos.

Actually, if I wanted to make a comparison it would be with Unholy Swill's album 'Oniontown is the place to be'. Both have production values that are so unspeakably awful they sound unreal. I can't stop listening to this Exterminator album.