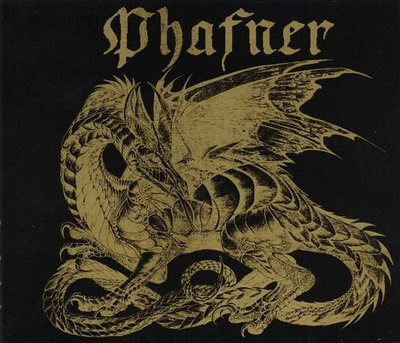 Phafner's 1971 album, Overdrive, is the stuff of record collecting legend. Rumor has it that only fifty copies were pressed. This seems a little suspect, but either way, it has fetched as much as three grand on eBay. Overdrive is a pretty fucked up druggy listen, it's raw, it's sloppy, it's full of vigor and spirit. The opening song "Plea From The Soul" is pure doomy bliss, but then the record trails off into some neanderthal blues rock. It's 1971, you're transported to a sweaty Iowa barn, hash smoke hangs low in the air, and sad-eyed caucasian dirtheads bang out crude tributes to their favorite sepia-toned negroes of yesteryear. I dig it, and you will too. Reissued on CD by the brilliant Akarma label.
Here
Posted by Aesop at 12:03 AM

That cover, that fucking cover. I love that. downloading as I type.

Aesop have you already heard NUNSLAUGHTER's new split 7" with BRODY'S MILITIA? fucking brilliant in spite of they do just coversongs (incl. SACROFARGO's READY TO FUCK)!

Papst, I haven't heard it. I am a huge Nunslaughter fan. Ludicra had the pleasure of playing a few dates with them way back. Great dudes.

Papst, I haven't heard it. I am a huge Nunslaughter fan. Ludicra had the pleasure of playing a few dates with them way back. Great dudes.

That description was pure poetry.

Aesop I'll rip it for you and send you a link via e-mail tonight!

I originally read "caucasian dirtheads" as "crustacean dirtheads", and it blew my mind. This sounds awesome.

It is really awesome even if it is not crustacean.

you should have mail!

This is probably the best 70's album I've downloaded from here or anywhere in a while. Its definitely got that soulful doom sound to it, kinda like a more mellow blue cheer or something. Thanks for posting!

downloaded this a while ago. finally gave it a listen. everything i love in 70's underground rock - sleazy, sloppy and FULL of heart.

love this! thanks, Aesop.