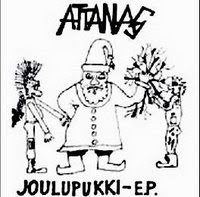 Well, it's Christmas eve and if you are a Finnish child you are probably eagerly awaiting the arrival of Joulupukki, the Finnish Santa Claus. Joulupukki is like Santa in many ways except where Santa lives in the North Pole, Joulupukki lives in a frozen hell known as Korvatunturi which is actually just a National Park in Finland. Joulupukki doesn't break into your house via chimney, he politely knocks on the door and asks "Onkos täällä kilttejä lapsia?" (Are there any well-behaved children here?) You bad kids get sticks for your parents to beat you with, awesome. Attanas were a Finnish punk band that made this 7" EP 1987 to celebrate their country's bizarre yule-tide tradition. On the crudely rendered cover you see Joulupukki giving sticks to some punkers who have presumably been bad, probably huffing glue, smashing the state, and running afoul of the local constabulary. I have to send a big old thank you and a "Hyvää Joulua" to Terska of the amazing Saapasnahkatorni blog for this and many great läsnä ja hengenlahja over the past year. The rest of you motherfuckers are getting sticks.
Hyvää Joulua
Posted by Aesop at 1:34 AM

It's just my luck.

I'm a stickman, myself.

..or NOT a new Ludicra album in ages.

Have a cool Yule,fool!
I know I'm gettin' a stick, but I was just wonderin', whatta the good kidz get? You must be one.

awsome blog.
great variety.
i really like your blog...has music that i never knew that existed, thats a good thing....i love finding a new style, a new genre, a new band.