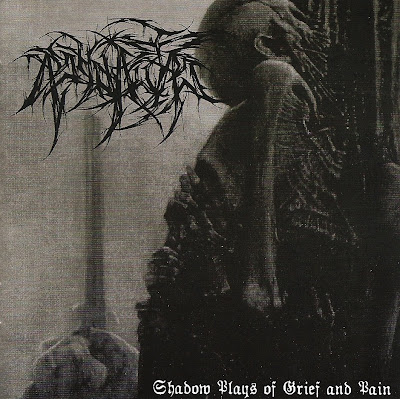 It wasn't long ago that the words "American" and "Black Metal" in the same sentence would produce laughter and scorn from many staunch supporters of deep Satanic art. Nowadays it would seem that some of the most interesting and violent Black Metal comes from the states. It's difficult to peruse the pages of the metal mags and miss all the accolades thrust upon bands like Xasthur, and Leviathan. Los Angeles' Ashdautas may not get the attention of the aforementioned hordes, but their 2005 album Shadow Plays Of Grief And Pain is so harsh and so mephitic that it demands to be heard. Most noticeable are the tortured vocals of Naeth. The guy seems torn apart from within, and combined with the fumbling, discordant chaos of the band, Shadow Plays is a noxious cocktail of pure, unabashed agony. Ashdautas received a bit of attention some time back for their hardline stance against "MySpace bands" and their threats of violence to other bands and individuals in "the scene." This all makes for interesting threads on the interweb forums, but also serves as a distraction from Ashdautas's real appeal, their brutally stark and manic cacophony. Ashdautas belong to a devout sub-sect of Black Metal bands calling themselves The Black Twilight Circle. Other bands in this rigid group include Volahn, Aresmenda, and Kallathon. Ashdautas is no joke. If your interest in Black Metal is only an ironic gawking concern to be tittered at between rides on your fixed gear and lines of coke at Pop's then turn back right now. This is the genuine article, you are not.
Die!
Posted by Aesop at 12:00 AM

great fucking write up man, fuck the posers
i am by no means 'kvlt'
but i do know this
hipsters/scenesters/ and lame asses who think being 'extreme' is as cool as their fancy designer coffee drink can take a flying fuck all the way back to where ever they came from
cant wait to rock this shit on my way to work in the a.m.

"between rides on your fixed gear and lines of coke"

you, sir, are a literary genius.

What the fuck? This is some nasty shit. That singer truly sounds disturbing. Nice. It doesn't really sound like anything I ever heard.
By the way, I never commented before, but i do really appreciate your efforts, and enjoy reading your blog. I started feeling stupid never commenting.
Greetings form Amsterdam.
Thanks.

Aesop-
This looks awesome. Thanks for thinking of us.

Great stuff! I googled these guys and came up with a lot of stuff about how they're a "joke" band. There's apparently a compilation on discogs about how they're "fucking gay." Not sure what that means, but I bet Naeth's bike has gears!

Like I mentioned in the post, I think these guys made a few enemies, ignited a few feuds, and ruffled a few feathers along the way. While I'm all for controversy and extracurricular activities, I really think the music is interesting enough without the drama.

funny you post this. apparently they're playing dates in '09 with Bone Awl.

This is absolutely beautiful and fucked up and is really working with my current mood perfectly.

Thanks again, as usual, Aesop.

i can't wait to hear this, im tingling with excitement already.
Thanks Aesop

awesome write up indeed.cosmic hearse has practically revitalized my interest on black metal introducing me to so many wonderfully obscure artists.i haven't heard Ashdautas yet but i'm eager to judging by your description.thank you Aesop.

Excellent choice/post on this one! Dominck of Hospital Productions (Prurient) was pushing this a while ago. The sound of a full band sets this apart. Really unique vocals, which are really favored in the mix. Its nuts.

"veganboyjosh said...
"between rides on your fixed gear and lines of coke"
you, sir, are a literary genius."

Man he nailed it on the head with this comment. Thanks for this perfect Winter time Upload. Aesop, you never let down.

Good stuff. My morning is a bit scarier already.
BTW, is it cool if I listen to this between rides on my mama-chari?

What's a mama-chari you ask?

No bike kvlter than the mamachari.

nano247, I for one enjoy fancy designer coffee... served black, just like my metal. HAHAHA, I made a funny...

"...coffee black, just like my metal..." An M.S.I. reference? For shame, Anonomouse. Exited to hear this one, but I've got to slow down on the DL, I've got unheard albums up to my ears. Always an inspiration, Aesop. Thanks, again.

I'm really enjoying this one. Especially 'and you will shed tears of scarlet' and 'tremble as your heaven falls'.

How adolescent. I'm sure they had the full permission of Wrest, Malefic & Andrew Harris to feature their work.

That comp (if it exusts at all) is the work of a very pathological and bizarre guy named "Bathym" who has a fake label and numerous fake releases with the sole purpose of shit mouthing and discrediting any band or individual that he feels has wronged him. I have some of his tape releases and they are weird and sad. He also has major beef with the band Veil, and the band Wulfhere. Bathym once released a tape as "October Foggy" claiming it to be the work of Stuart of Wulfhere, it was black metal played with pots and pans for percussion. L to the O to the L

great band man i love volahn too, do you know where i can find aresmenda and kallathon material?

Email crepusculonegro@live.com about upcoming Crepusculo Negro releases (mainly cassette albums and eps). The Volahn cassettes (1st 100) are completely sold out. The LP version will be out on Klaxon soon. I don't know if they will be pressing more numbers of the cassettes...

Thanks. This is sick sounding stuff. And yes, indeed, Ashdautus is playing some shows with Bone Awl in May 09. Unfortunately, they are only playing some shows on the west coast. Volahn is supposed to do the whole tour. I am so at the Ann Arbor show. It's all on the Klaxon site.

Thank you very much for this album, since I d/l it I can't stop listening to it!
It's refreshing to hear an actual US BM 'band' nowadays, and as much as I love Leviathan and Xasthur, this has so much more of a human feel. Misanthropic, but human!

Thanks for posting this vicious album.

man, this black twilight stuff is tough to track down! google searches throw me right back to this post. why are the best records always the toughest to get your hands on? makes em better when you finally hold em, eh?

All I can say is thanks for putting this up!

singer sounds like an rabid bat. punishing to even the blackest soul.

This is some good shit. What do you think of Volahn?

Fucking HELL!!! This record is killer,my Lady says the singer sounds like a little girl. That would be even better if it was a little girl kind of like the Drunks with Guns record,where they had one of their little sisters singing-"Mommy,I'm a Zombie"...anyways this record is getting heavy rotations.

This record is intense! I found the Arizmenda record on a different blog, for the people who were interested in hearing that also.

I seriously can't get enough of this one.

fyi, I did the layout for both the cd and lp version of this album and i ride a fixed gear bike everyday. haha.