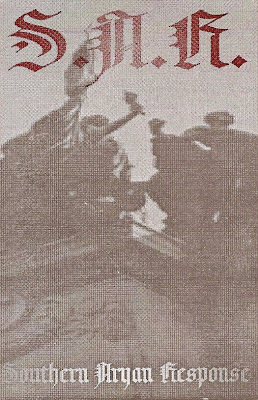 S.A.R. stands for Southern Aryan Response, so right away you know the agenda. The southern part refers to this band's origins in Brazil. Now while I can't condone the political views of S.A.R., I can totally condone their ridiculously gorked and dim-witted Black/Thrash mess. So if you're a fan of the wonky Black Metal that makes it on The Hearse, and you aren't spooked by unsavory politics, then this is for you. This self titled, self released tape came out in 2001, and it's deliciously bad-good.
Here
Posted by Aesop at 12:00 AM

While we're on the subject of slopped-up garage black metal played by shady fuckers with a narrowly specified hate palette (now there's a euphemism,) Absurd's Thuringian pagan madness tape would be a well-fitting post to say the least. It predates the band's third reich fetish leanings, yet retains their schlock appeal with excellent proletarian singy vocals and sub-AC/DC pub rock coverband drumming. EXCELLENT shit in other words. If you need a hookup, just say the word.

I always wonder how I should feel band about enjoying bands whose politics are beyond the pale....but sometimes they sorta rock.

while i understand why you like stuff like this, maybe its not such a good idea to aid in the dissemination of it.

Why? Has anybody really been moved to racism and violence by a limited edition cassette by a shitty band?

Seems like the NSBM tag generates a lot more hype than it deserves...BM is supposed to be sinister and "evil", and my feeling is that most of these bands use this kind of stuff to generate that aura. I doubt many of them actually are connected with organized white power groups, etc., though they may be hateful assholes personally, who cares? What would you expect, liberal politics in BM? Despite the trappings, this is music (art), not politics. What I find especially funny is when these guys try to rectify their " evil" attitude w/ the "wholesome white family" values most white power groups espouse. Many great BM bands are NS - like you said, Aesop, is a screaming misanthrope likely to attract many potential race warriors?

Just caught the ridiculousness of my last sentence: I guess there are plenty of screaming misanthropes out there recruiting race warriors - I just doubt many of them are lurking around in basements wearing corpsepaint.

what the hell do the brazilians have in common with the aryans? if i may say so, moral questions such as, "should i listen to this?", "should i do that?", of such depth and intellect can only be answered by people like jerry springer.they know and this is lame. worse than sorto

actually a gang of neo-nazis hanged my cousin with the tape from their demo. the tape broke and it didn't kill him, but it was a trying ordeal nonetheless.

Okay so can someone explain something to me?

How can non-Aryans back Aryan agenda? Since these dudes are Brazilian, wouldn't the average white supremacist want them to fuck off and die along with other nonwhite races?

Southernmost Brazil has quite a few caucasians, mostly Germans, actually.

I tried listing to tapes just last week on my old walkmen. Fuck! Such an ordeal. Although they are the toughest motherfuckers when comes to compact audio entertainment I cant get over how shitty it is to rewind.
Oh but if I found an SAR tape on the ground Id totally listen to it right now. I dont think Ill be downloading it though.

I'd suggest cause of the ratline?

cause of that, there are a lot of people down there directly related to some of the the top-players so... but, just for the record no matter how often those polish, russian, whatever NS-asscandles claim that it all was a misunderstanding cause both parties fell for a jewish plot by the definition given by the "Rassnkunde der SS" they aren't white and anyone claiming to be aryan would be put into a lager!

It is important to note that "Aryan" as a "racial" concept does not have a tangible definition or even a vague outline, is not rooted in any variant of fact or reality and shares no similarities with the actual text-book definition of the word.

TL;DR: any fuckhead anywhere can tag themselves with this nonsense term and it doesn't mean shit and it never did. Darkthrone called themselves "Norsk arisk black metal" on the back of Transilvanian hunger, does Fenriz look like a viking ship battling norseman lusekofte warrior to anyone?

i'm from brazil and hope these motherfuckers fucking died from the flood that happened on the south recently... fucking scum.. brazilian nazies, hahahahaha fucking joke

do you want to separate from the rest of brazil now, motherfuckers? or are you crying for help? do you want us "unpure" dudes to send food and water and cry for you?

nothing against you aesop, you can listen to whatever you want

My take on it is that, at its heart, heavy metal has always embodied an atmosphere of rebellion and shock theatrics, a misanthropic game of one up-manship that isn't necessarily an embodiment of realized philosophy but more of an attempt to rattle the cages of parents and authority figures. NSBM artists (especially those from countries that were directly affected by Nazi activity in WWII) utilize the imagery that is culturally and historically taboo to thrust a stick through the spokes of proper society, precedents that had been established with satanic adornments by generations before with bands like Black Sabbath and Venom. If artists felch Nazi/white supremacist imagery to the point where it is no longer shocking, what then shall be left to be alarming within the genre? Liberal humanist black metal? I could get up in arms about something so soulless.

Well stated, Mr. Bowlin, but you can't discount the notion that some (few, but still significant numbers) of the bands are very entrenched in this ideology and aren't merely "scaring the parents" so to speak. More often than not these bands disappear after a few limited run tapes and comp appearances.

I won't doubt the truth of your statement but for me I can't help but be slightly titillated by the notion that there are bands out there who take their ideology so very seriously and create an ungodly racket expressing it. I guess that's the folly of youth, to be so passionately idealistic, even if one's ideals are somewhat contrary or completely asinine. What's also intriguing is where these bands go after they've made their musical proclamations. Is there a sort of Island of Misfit Toys for NSBM bands, or do they grow up and get economics degrees like Wagner Antichrist?

They get into martial dark ambient stuff and goth and make vaguely racist records that you can dance to.

Listening to this now, it's seven different flavors of retarded. I like the sheer audacity of something so odd and awkward. Thanks for sharing!
And I request to hear some of this racist martial dark ambient material you speak of. I am intrigued.