In The Style Of Demons 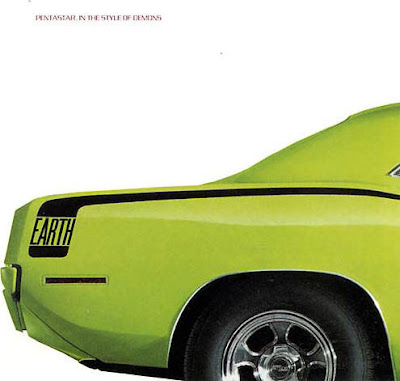 Pentastar:In The Style Of Demons was Earth's fourth and last studio album before a nine year hiatus. This record was critically reviled upon its release, but like any Earth recording, it's a soothing analgesic. Where the earlier Earth albums may have been highly potent opioids, Pentastar: In The Style Of Demons is more of a Dextropropoxyphene high, a bit less intense, more "musical." There is significant anecdotal evidence from patients that Pentastar: In The Style Of Demons is effective, but a third of patients suffering chronic pain report relief from that pain when treated with placebo.
Here
Posted by Aesop at 12:00 AM

My friends son had a matchbox car of the same car that is on the cover. We called this toy the 'Earth Car'.

This is doom blues. And you are the mayor purveyor.

Great post, aesop. This is the first Earth album I've purchased and I must say, its one of my favorites (probably because this album introduced me to earth). Sure, ive gone ahead and bought their other ones, 'the special low frequency' album...but this album, can't say enough good things about it. The Temple Song, an epic doom-blues masterpiece.

This is the record I play for folks to introduce them to Earth. Hasn't failed once.

This is a great record, anyone who says otherwise is a dope.

You still need the Ambush and Hels EPs?

Indeed I do. This is the Swedish metal band Ambush.

This is a great album... it's so funny that when a group "switches styles," all the critics hate it, but 20 years later everyone loves it. I just watched the Scott Walker documentary and it was the exact same thing. Everyone hated the weird stuff that now they think is genius.

That means that "Cold Lake" should be getting some love soon.

Shoot! I thought you brought us some weird-ass ZZ Top import at first glance. JMD got me interested though with his Doom Blues classification.

Classic material. I love the Tallahassee video. It's not in slo-mo, that's just how Carson rolls.

The intro is always in my head....always

Cold Lake. What a perverse, wretched clusterfuck of an album. I love it!

Great album and one of my favorite covers! Everyone should have this in their collection.

I've long loved this album. Some folks might not have liked this when it came out, but one of the great things about Earth is that they don't make the same album over and over. They've gone through different phases, and they've pulled them all off well.

I mean, musically I can definitely get behind this album. Getting past that album art first and then appriciating the music for what it is, however, is another story entirely. Good god, even Homer Simpson wouldn't want to get behind the wheel of that booger-green monstrosity. I sure hope Dylan Carson doesn't actually drive that thing.

I must confess I was one of the many dipshits who dimissed this album when it first came out- but it was my loss, as it is fucking incredible. I may have not 'got it' at the time, but I do now.
Thanks for posting this, Aesop