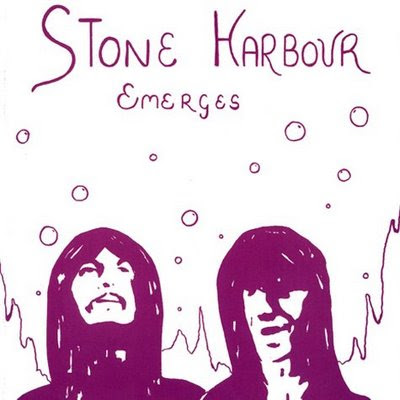 Remember like a year ago when everybody was growing beards and doing the whole hippy dippy free folk thing? Well these dudes were about thirty-four years too early to get their balls washed by Pitchfork, but damn if Ric and Dave, collectively known as Stone Harbour, didn't eke out one of the creepiest records of super lo-fi Spahn Ranch acid folk. Little is known about Stone Harbour, so usually when I listen to this I like to imagine various scenarios involving Ric and Dave. Sometimes they are college roommates, sometimes they are friends, sometimes they are lovers. Once, in my imagination, Ric cooked up a hair-brained scheme to get that chick Lisa from down at the coffee shop to take notice of Dave, who is generally shy around women. Of course it backfired and Dave was horribly embarrassed, he didn't speak to Ric for a week. Then there was this time that Dave finally did land a date with Lisa, and Ric came home drunk with a nasty gash on his head, rambling incoherently about being jumped by "100 dudes." Dave, being Dave, was quick to help his stupid fucking retarded friend out at this most inconvenient time, but in the end it was a bonding experience for Dave and Lisa and they dated for several months, that is until Lisa left Dave telling him "It's me, it's not you," but in truth, it really was him. Also in my imagination, Dave is now a fairly successful screenwriter, Ric died of AIDS some years back, sorry that's how shit goes sometimes in my mind.
Here
Posted by Aesop at 12:10 AM

amazing, simply amazing. You now when people put LOL and you know they didn't really laugh out loud, and it kind of eats away at your soul? Well i really laughed out loud.
Thanks Aesop
can't wait to hear it.

The best review yet. And this is such an under rated classic. Thanks for sharing.

Gotta say aesop, this is one of the more bizarre posts ive seen here. no complaints though, pretty entertaining.

I am, however, very interested in what happened next to Ric and Dave.

Did Ric ever get a shot at the coffee gal?
How did Dave break into screenwriting (that's a tough industry)?

FYI: Avoid the recent reissue of this album (can't remember the label atm)!! One of the members (who is apparently a car salesman these daze-- sorry to crush yer fantasy, dude) redid the vox, added synth-percussion and... well, fucked it up completely. Almost sounds like an inept version of an 80's Phil Collins LP. The worst part is that none of this is mentioned except in small print in the liners.

Interesting story, no mention of the fact that Ric's childhood home was actually next door to Joe Cocker's uncle or that in 10th grade Dave was arrested and spent a night in jail for dumping 10,000 packets of jello mix into someone's swimming pool (his dad worked at the factory and would bring a lot of it home).

This is some of your best writing yet. You've got a real gift for words that I can only look up to. Oh, and the music is cool, too.

you are truly a saint. this is by far the best music blog i've been to....i'm getting such a schooling here on so much music i missed out on while i was obsessing on other genres...your love and devotion to music is obvious and your taste is impeccable, it's nice to see someone posting who is down to earth and not afraid to put up things that might fall into guilty pleasures ect along with pure awesomeness and brutality..... anyway thanks again!

Thanks, Chris. My motto regarding guiklty pleasures: "There's no guilt in pleasure." Glad you are liking the site, I like doing it.

Oh, Roger, No it was Dave that dated Lisa but it didn't work out. He got into screenwriting by having a fender bender with Martin Scorsese that led to a series of fateful events. Ric's life was empty and void of any real meaning, he wandered in and out of drug abuse and failed relationships. When he died he was addicted to heroin and was living in an SRO hotel in Cleveland.

this record is a real mind blower from those daze
you might dig this mysterious acetate of 70's basement psych too, Aesop...unique stuff.