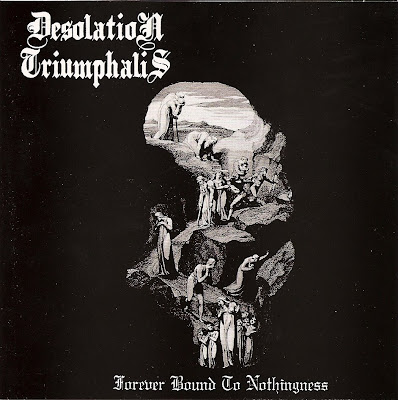 Desolation Triumphalis were a short-lived French Black Metal band that emerged from the whole Seigneur Voland/Kristallnacht/Blessed In Sin/Funeral clique. If you are familiar with any of those names then you know to expect very melodic and pensive work from these folks. Though Desolation Triumphalis only released one album, 2006's Forever Bound To Nothingness, it is easily one of the best Black Metal albums to come out in the last five years. They were a bit more elegant in their approach than the other bands in their scene. The songs seldom blast, and lush keyboards dominate the arrangements. The production is muddy and obscure but still has a grandiose aura. The sounds on Forever Bound To Nothingness reminds me of the visual art of Karl Albiker or Arno Breker, and the bottom-lit Roman columns of a different time. Wistful, nostalgic, and forlorn, this is mandatory.
Here
Posted by Aesop at 12:00 AM

their split with HORNA is pretty damn good too!!!

this dude has all their shit

This is fucking great. I have the Horna split. Never heard this release though.

hey man, love the blog and you should check out mine: burning-minds.blogspot.com

Think you'd like some stuff on it; if you want to link me, awesome!

Thanks and keep the good jams coming.

I feel a little odd typing this, but I heard Ludicra for the first time today. That's good stuff, man.

Swill, looks great and your link is up. Thanks.

hmm, does this require an NSBM tag? i only ask because you mention kristallnacht.

i actually dont even care if theyre NS or not, im just curious.

Andy, I considered it, but Desolation Triumphalis don't seem to lyrically have an NS agenda, even if they have members who might.

thanks for this. It's a hell of a mix of (oddly, or at least to me)Von Thronstahl sort of martial-industrial with that longing, yearning sound in a lot of Eastern European BM.