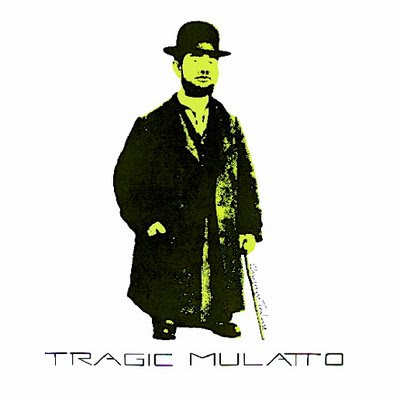 When I moved to San Francisco twenty-three years ago Tragic Mulatto were one of the most interesting and challenging bands on the scene. They had the mongolid tribal backbeat of the Butthole Surfers but everything else was purely their own Mission District drug fuck bad acid sweaty thigh gut punch. Rolling and thunderous and sometimes peppered with tuba, Tragic Mulatto's songs were chaotic leviathans lumbering through the city streets like a procession of absurd death. Their lyrics were the bleak autobiographical tales of ribald lust, desperation, addiction, poverty, and bike messengering belted forth by a mighty woman named Flatula Lee Roth. They speak as much of her own psyche as they do of the city she loves and hates (much like BOMB.) Tragic Mulatto could have only come from San Francisco in the late '80s, no other place at no other time. I think Chartreuse Toulouse was the band's finest (and final) release.
Here
Posted by Aesop at 12:16 AM

thanks for discover me this

This record hit close to home for me as well.
Enjoying revisiting the filth that was our City back in the day.