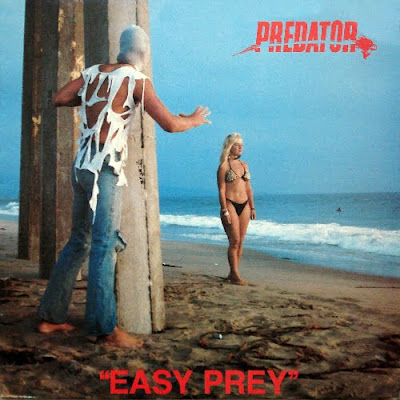 I picked this up on vinyl for $3 in Toronto while on tour in 1996. The cover, the band's name, and the album's title was just too "rapey" to resist. I didn't have much hope for the actual music inside, so this epic monument to mediocrity didn't disappoint. Some speed metalisms creep in but the fare here is wholly fluff. So is their anything redeeming about Easy Prey? Well, these dudes weren't bad players, and the lyrics of Jeff Prentice are a study in adolescent rape fantasy and pedestrian misogyny, but only when they aren't ruminating on typical '80s metal stuff like hell and Russia. On the back cover, the Predator has the prey over his shoulder and the mask is off revealing the fetal alcohol feaures of presumably one of Predator's helpful bros. I revisit this work every few years just to see if I can find any good in it. With every listen I drift off into thought, wondering if the members of Predator are somewhere toiling away at some day job and not telling their coworkers about this unfortunate chapter in their lives. I just can't imagine anyone standing around the water cooler saying "I used to play in a band back in the eighties called Predator, we released an album and everything, it was about rape and shit."

i want this. just so that people rummaging through my record collection can be disturbed just a little more than usual.

this must be a socal band. besides cirith ungol i bet you probably think all those early 80s socal metal,not glam,but still look funny,judas priest kind of metal bands suck huh? youd be totally right,but some of those early metal massacre comps had some good stuff as rockin as some of the nwobhm you post

my captcha is forrap,so this ones for you jam master jay (taking fat swig of the pbr)

I've spent enough time over the years chuckling at this album cover when it appears in various "worst artwork" listings that I somewhat feel I owe it to the band to grab this download and actually give the music a chance, 'turd' tag or not. So, cheers; hopefully when I finally get around to listening I'll remember to pop back in and give an assessment.

Did El Duce from the Mentors have anything to do with this record? I could see him spearheading the underground Rape Rock movement back in the 80's that Tipper was so scared of. 'They bring women out on stage, and they rape them! They wear torn pantyhose masks! It's rape, not music!
RAPE!!!'

About time I actually heard this stupid thing. Thanks.

I gotta say, I enjoyed this thing a lot better than I expected to. When they slow down their lack of ideas becomes apparent, but the faster numbers are definitely worth listening to more than just once. Some of the drumming is awful, but on this occasion I think that adds to the record's charm rather than detracting from it. I'll keep hold of this one.

My old band played a gig support to this lot in Ireland in about 1992. They refused to share/move any amps, so we had to set up our stuff in front of there's. We played our set of anarcho punk to mates and they played to 2 people! As far as I remember the back of their album cover was quite naff too!