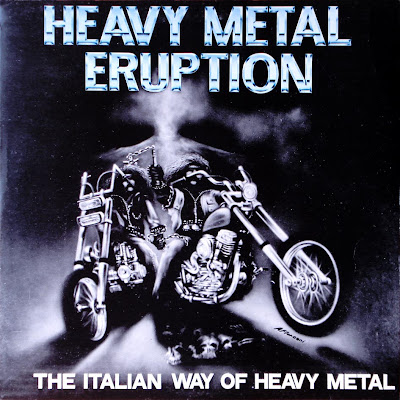 Here's a post that I have been really excited about. As much asI am a huge fan of these obscure regional Heavy Metal comps from the '80s, usually they yield one or two discoveries, a few passable bands, and then one or two laughable abominations. Heavy Metal Eruption is a welcome exception, a privately-pressed Italian grab bag of awesome. Every track here is decent. Halloween kick it off with an obviously NWOBHM inspired gem "Vikings" Crying Steel keep it steely with "Thundergods," a peppy cut of real Heavy Metal. I have heard the bulk of Crying Steel's catalog and these Bolognese bangers had it right. Death SS is one of Italy's best known metal bands. Their contribution, "Black and Violet" is pure occult doom bliss. Elektra Drive serve up a great song called "The Lord of the Ring" that sounds like Slough Feg meets Pagan Altar with spacey keyboards. Ransackers keep it metal with "Deathline." some odd acoustic guitars, squirly solos, and strange vocals make this track another charmer. Revenge slunk along with sleazy number "Angels In Leather." Revenge comes off kind of like Judas Priest circa Defenders of the Faith but with the addition of quaaludes. Hearse favorites, Rollerball are the greatest Italian Heavy Metal band of all time and their track "Wild Town" just cements that notion. Shining Blade bring the lamp down with a ballad called "Freakish Footsteps" maybe not the best choice to represent their band. Still not a bad track, give them a break. Steel Crown bring us back with the way over the top "Prisoners In The Box." Jesus, listen to the drummer and bass player, Steel Crown kept busy. Strana Officina, ,these unhinged uomini are the only band here that sings in Italian. The music is dirty rocking Heavy Metal with the confident vocals of an absolute character named Bud. Heavy Metal Eruption is a veritable Vesuvius of molten metal, enjoyable from front to back.

Dude! Thanks for putting this up! I am really stoked to listen to this tomorrow while slaving away at the wage.

Thanks this is incredible stuff, look at that fucking cover! How could it not be anything less.