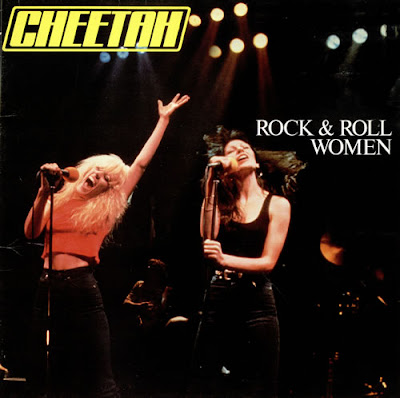 It was a perfect plan, prop two tarts with minimal talent in front of a fairly tepid bar rock band and watch Cheetah take the world by storm. So what happened? Why aren't Cheetah a household name like Tampax or Rid-X? Well perhaps it was because they were Australian, maybe because this isn't very good. So why is it here? Well, it had occurred to me that someone out there may have been searching for this. Perhaps it is that elusive grail in someone's nerdy record collecting quest. Or maybe some of you were directing, and producing a really hackneyed '80s teen sex comedy and needed some trite and dated rock music to fill out the awesome soundtrack. Whatever your reasoning, I won't judge.

why is it here?
only because it is awesome!
"bang, bang shot full of love"
you know; like a bullet.
like when you are shot.
only this time it is actually love that you are being shot with and not a bullet.

"Prop (insert #) tart(s)/stud(s) with minimal talent in front of a fairly tepid (insert genre) band and/or recording and watch (insert name) take the world by storm."

The formula for the music industry.

Oh man,I could'nt bear to listen to but a few moments of each track.One of the worst records ever made. Should top all those worst of lists