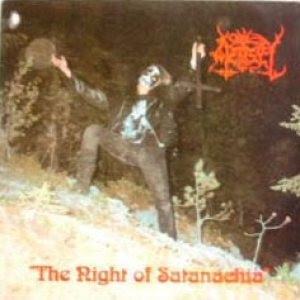 Releases like this, with their blurry photos of corpse painted youth, illegible logos in red, and what I presumed was a typo ("right" instead of "rite" but as Dan Fried pointed out, is actually "night") hold so much promise and so often fail to deliver. Well, while Azazel weren't the greatest Black Metal band in '96, The Night of Satanachia isn't terrible, even if it is terribly generic. This most Satanic night would be the band's only full length release, although the members of Azazel remained active in the scene.

it's "Night", actually! great blog, keep it up.

Classic! NExt time I'm at Vintage Vinyl in NJ I will look for a copy of this (and those familiar with the layout of the store will know where I mean). Those colors will really pop in a sea of B&W BM covers.

Is this the NJ Azazel, by any chance? My brain problems sometime leave me making up whole genres of metal sometime. It's a tough affliction.

No, they are Finnish. In fact they released a split-LP with Goatmoon earlier this year, after 15 years of nothing.

I love black metal bands who use fonts other than Old English for their album titles. That font Azazel used is Bocklin, which is kinda Ren-Fair/Woodstock-ish with it's vibe. Looking forward to seeing a kvlt black metal album title in Comic Sans!

i will honestly say i can't read 85% of the black metal band fonts i see on flyers around town. and ... the 15% we have left is about how many black metal bands i really enjoy.

Actually, while the font in question definitely has a "Ren-Fair/Woodstock-ish" to most modern eyes, it was designed in Germany in the early 1900s and is heavily associated with the Art Nouveau movement. The name "Bocklin" is correctly "Arnold Böcklin," and it was called this in tribute to the symbolist painter of the same name who died around the time of the typefaces original release. These sort of fonts had a huge revival during the whole psychedelic/hippie era, hence the association...

I like that there are more comments on the font than the actual music.

Trivia: most of the lyrics were written by Mr. Northwind, the editor of late I Came From Darkness 'zine.