Most Things Haven't Worked Out 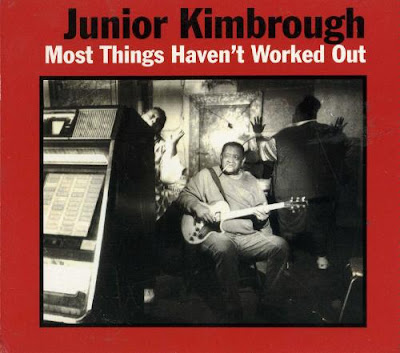 In 1997 Junior Kimbrough busts out with the best title for a blues record ever, just a year before his death, and goddamn what a record it is. Kimbrough's unfuckwithable tone, and the repetition of the songs kind of reminds me of these last few EARTH albums in spirit and atmosphere. The recording is so warm and genuine, you can hear the room, the walls sweat, and the band cooks and stomps while Junior sounds as vital as ever. There is a magic in recordings like these, the sort where a few mics are set up somewhere and whatever happens happens. Maybe at the end of his life Junior Kimbrough looked back and decided that most things hadn't worked out, but this record definitely is the exception. It works, and it works hard. Deep shit from one of the blues' unsung masters.

I have heard about this guy but have never checked him out until now. I am only three songs in and this album is awesome. The Earth comparison is a good call, especially guitar tone on the first song. Definitely sounds different than any other blues albums I have heard!

At my charcuterie job, we would listen to Junior while working in the kitchen. His tones reverberated off the stainless steel as duck stock slowly simmered on the stove. With pecan smoke from the bacon smoker permeating the air; our humble craft was lifted by this humble man. Only you could draw the connection between Junior and EARTH, and it is a beautiful one. Fantastic post, Aesop.

Holy fuck this is good!

Already have the album, just posting to comment on how fucking awesome it is.

Glad to see that you commented on the title. Such a great title - he was good at those. "Sad Days, Lonely Nights" is another great title for another fucking awesome JK album.

The Black Keys have a tribute EP but god damn son don't even try to cover Junior Kimbrough. Pricks.

Junior K. is the king! My fave is 'All Night Long' but everything JK has recorded is essential

This is amazing.
Been on repeat most of the day.

and the hammering of that snare...

Downloaded this when you posted it, haven't listened to it until now.