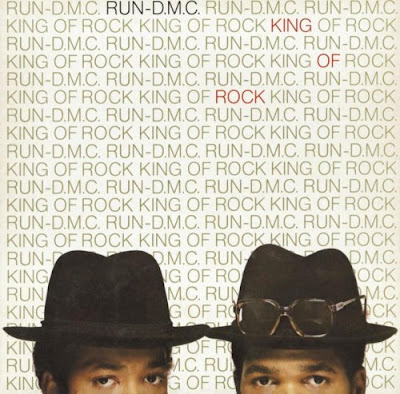 No one in their right mind would dare dispute RUN DMC's roles as pioneers, and as awesome as their first album is, it was the sophomore release, King of Rock, that I believe was their pinnacle. Listening to this now the rhymes seem naive and a bit pedestrian, but when it released in 1985 it was the shit. The video for the title track was the first Hip Hop video to get play on lily white MTV, and RUN DMC were the only rap act invited to "step on stage at Live Aid," if I am to understand correctly, all the people gave and the poor got paid. The follow up to King of Rock, titled Raising Hell, was a commercial success that produced their biggest hit with the collaboration with Aerosmith, but in my opinion, it is a spotty album that doesn't hold a candle to King of Rock. Today would be a fine day to revisit this classic, you might be surprised at just how many of the lyrics you remember. R.I.P. Jam Master Jay.

Great album. Outside of the States it kind of came between the Grand Master Flash / Melle Mell period and and stuff like LL Cool J's Radio, Just Ice, Licensed To Ill etc. Remeber the film Krush Groove?Hard album to find in Australia at the time. Maybe only 1 or 2 stores in Sydney had it for sale. Raising Hell had a few good tracks but it kind of sucked that it took a collaboration with Aerosmith for them to get international attention but whatever. Aesthetic of RUN DMC is still so unique even today. Even towards the end they were awesome. JMJ!!!!!

Great post! I must agree, this album had a huge impact on me at the age of 13. It's been over 25 years & it still stays in my personal music rotation. They can "rock it like that"...

The first show of their first national headline tour in Detroit, 1985? I was there.
The following week I saw PiL on their "Generic" tour, and then Slayer the next week after that.