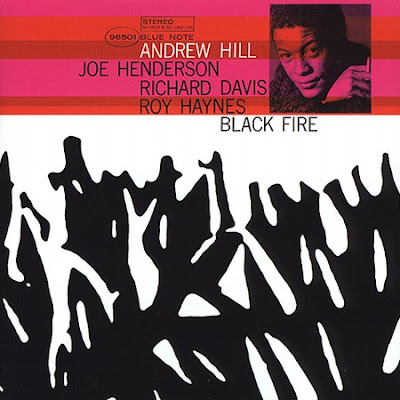 Black Fire was Andrew Hill's debut as a leader for Blue Note. For this legendary session, Hill was joined by Joe Henderson, Richard Davis, and Roy Haynes. The album is an excellent transitional piece between modal and more avant jazz styles and contains some latin rhythms peppered throughout the songs. Hill was definitely one of the most imaginative and daring piano players in the Blue Note pantheon, and he wasted no time digging deep into his intellect and exploiting the sort of creative freedoms that working with Alfred Lion afforded. Perhaps the most inspiring aspect of Black Fire is the rhythmic interplay between Hill and drummer, Roy Haynes. Of the gazillions of sessions Haynes has worked on, this has to be one of his most invigorating performances. Throughout the '60s, Hill continued to push his abilities and explore new territory with a number of great albums like Compulsion, Judgment, and Point of Departure, but Black Fire marks a very deliberate onset to this journey. A great album, and a great introduction to the work of Andrew Hill.
Here
Posted by Aesop at 12:28 AM

Roy Haynes puts on a great show to this day!

I was jamming to a Cecil Taylor and Max Roach album last night. Heavy piano/drum interplay. Can't wait for this one. Cheers!

Officially my favourite blog. Thanks for all the hard work.

Aww yea gettin' all jazzy with it.

So good... Thanks again. He definitely walks a fine line between bop and free jazz that few others did..

Great! Your recent Jazz posts have opened a whole new musical world for me.

Loving the jazz on this site. I had never listened to Andrew Hill before, but this is good stuff. Thanks.