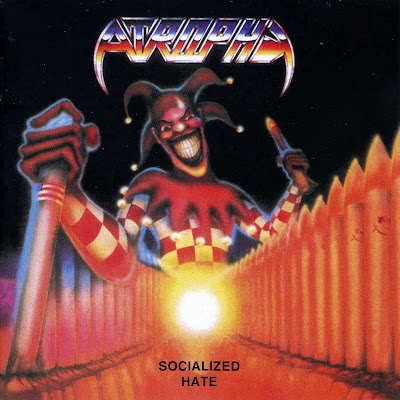 Here's some raging, puffy-shoe, thrash from Arizona. Atrophy hailed from Tucson, but were in keeping with the sort of thrash being lauded in the Bay Area at the time. Socialized Hate was the band's debut, it was released in 1988 by Roadracer Records. All the bases are covered here lyrically, with songs about drug addiction, religion, beer, serial killers...Socialized Hate doesn't stray far from the formula but that doesn't make it any less enjoyable, hell, it might even add to it. Bonus points for Bill Metoyer production and a classically cold war themed Bally Video Game style airbrush cover art.
Here
Posted by Aesop at 12:59 AM

Him spoke and said...

Fucking killer cover. I like what they did with the Diamond Headesque last letter in the logo, looks like it could pass for just about any OTHER letter than a Y.

Were any of these dudes vegetarian? I wonder that because on the 2nd lp they had an anti-vivisection song.

a good album to jack off to.

haven't heard this in forever, can't wait to get home and dl tonight. I found Violent by Nature somewhere around here, but if i remember correctly (i was only 12), this was the better of the 2...

Beer bong,suck it down,beer bong ,don't do it wrong or else you'll drown...I remember hangin' out in the basement of the pizza shop that I used to work at when I was 13(makin 2.25 an hr.)...getting the delivery driver dude to score us under aged thrashers a 12 pack...shotgunning beers,getting drunk and listening to this Atrophy tape,alongside some DBC,Hobbs Angel of Death and some other burn out bands. GOODTIMES!!!!

Saw them tour years ago with Sacred Reich...

"puffy show thrash"
Of course we all know what it is, but you just gave it a name, and I thank you.