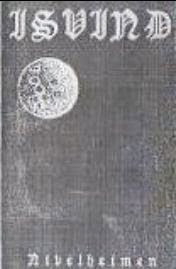 Isvind were another early Norwegian Black Metal band. They formed in 1992 and quickly started releasing very limited tapes. The second of these was called Nivelheimen. This is a classic example of Norwegian Blackness circa early '90s. The guitar sounds, the coldness, the Norwegain lyrics, all conspire to create an atmosphere of Scandi-teen communion with nature and Tascam Portastudios. Another grainy aural snapshot of a specific time and place. Spend a half an hour in the frozen woodlands of Isvind's imagination.
Here
Posted by Aesop at 12:26 AM

Heard 'Dark Waters Stir' but not this one. Ta!

Isvind were great, especially on the "Dark waters stir" record. I got to see them live when they played a rare show in 2003, which was pretty nice! Managed to shoot a picture of them also, which is something you will not see every day. Check it out on Flickr.

Nice. Dark waters Stir was one of my favourite BM albums for a long time and still gets regular spins. Cheers for this man.

killer demo! wish I could find an actual copy of this somewhere, someday. ive only ever been able to locate the Dark Waters Styr tape over the years

Killer kvilt! I love the way the drummer completely looses time on the third track. Imagine friggin metallica doing that