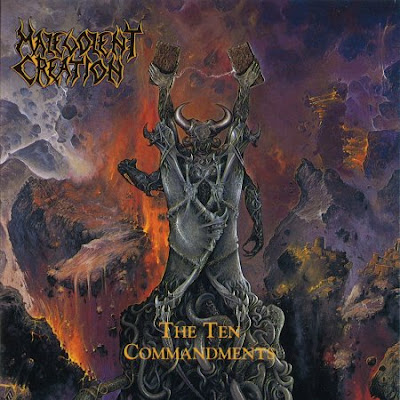 If you look past the redneckery, the tall tales, and you were to judge Malevolent Creation based on their first two albums alone, you would see a strong young Floridian Death Metal band. I grew up in the same town as these duders and used to see them play to scant crowds of doughy peckerwoods in sweat pants, and they were killer. So they weren't as smart as Atheist or Cynic, or as evil as Deicide or Obituary, or as Magikal as Morbid Angel, The Ten Commandments is such a fucking great record I am willing to overlook the fact that one of them pushed me down and called me a faggot in the parking lot of the Treehouse in Hallandale.
Here
Posted by Aesop at 12:01 AM

haha, oh man Hallandale is beyond irrelevant these days. I don't know if you moved out before the Button South was having tons of shows, but it later became a strip club that got shut down for selling coke.

can we also talk about how outrageously sick this cover art is?

Nailed it with this write-up. These albums make up for that one ill-advised lyric that everyone keeps bringing up... yet, somehow, I've never felt any compulsion to check out the band's catalog post-Retribution. I'm being prudent here... but, sensibly or foolishly so...?

much prefer seagrave's old stuff. new stuff is "cool" but is beginning to look very samey and kind of uninspired and "in a rut" kind of. "gateways to annihilation" art is really good though.

MC was the first death metal band I saw when they opened the Obituary / Agnostic Front / Cannibal Corpse tour.

Their Retribution cd was a staple in my play rotation until it was stolen by a woman body builder. Weird.

Every band should put out at least one good album in their career, and here is that album for M.C.

gotta say, that interview is hilarious.

The Treehouse, god damn
saw 7 Seconds there and probably Power House and Met my close bud Juan Montoya there.
So random.

I saw them play their album release party at Summers on the Beach, with Raped Ape and I swear on my father's grave that they played the CD, put the fog machine on and jumped around pretending to play. Decent album, thanks to the engineering but they were never able to pull it off live. These guys were just plain bad, live. I mean bad in the way that fucking Hellwitch was bad.

No reason to overlook ignorance. But, this is a great record. Redneckery in metal needs to die.

I could never raise enough money to pay to see someone in MC push some one in Ludicra down and call them a faggot.