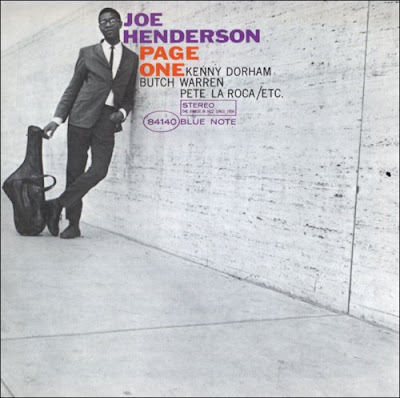 Joe Henderson cut his teeth playing in the United States Army Band at Ft. Benning, Georgia. Upon his discharge he found himself in New York working under Kenny Dorham, who was quick to recommend the promising young sax player to other Blue Note heavyweights. Soon Henderson was a sought after sideman and clocked a staggering amount of hours in the studio with such greats as Grant Green, Andrew Hill, Bobby Hutcherson, Lee Morgan, Horace Silver, Freddie Hubbard, and countless others. In 1963 Blue Note heads Alfred Lion and Frank Wolff sent the 26 year old Henderson into the studio with Kenny Dorham, Butch Warren, Pete LaRoca, and McCoy Tyner (credited on the cover as "ETC" due to contractual hassles with another label) The result was his debut as a leader, a fantastic LP titled Page One. Henderson recorded a second album for Blue Note later the same year called Our Thing, and while it is great, it lacks some of the magic of the first session. Page One has some of Henderson's best material and two classic pieces from Dorham. Relax and Enjoy.
Here
Posted by Aesop at 12:10 AM

I admire the valuable information you offer in your articles. I will bookmark your blog and have my children check up here often. I am quite sure they will learn lots of new stuff here than anybody else!

I am appreciating the jazz and history that goes with it. Keep it up.

Keep the Jazz coming! You Sir, have the good stuff!! Thank you!!

Great record. Dorham and Henderson are still so underrated.

McCoy Tyner is definitely bad ass. His album "Expansions" is a recording that I'm grateful my Dad introduced me to...

Out of the Night is the best track on here. It used to be the closing theme to an over night jazz show I hosted in college. Brings back good memories of getting paid to stay up late, get stoned, and play great jazz.