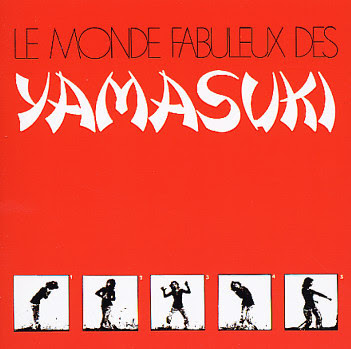 Are you ready for some sickeningly infectious multi-culti baroque pop? Oh good. Yamasuki (sometimes called The Yamasuki Singers) were the brainchild of a pair of French producers named Kluger and Vangarde who scored a minor hit in their native land with a single called "Yamasuki," the duo decided to capitalize on that success with a full length LP of Japanese/French pop love called Le Monde Fabuleux des Yamasuki. In order to do this, they hired a Judo master to announce the songs and a Japanese children's choir to sing. The album evokes everything there is to love about Serge Gainsbourg, children's shows of the '70s and antiquated ideas about Japan. Not sure how anyone could not like this record, perhaps if you had no ears, no soul and were a total dick, as for the rest of you, this will bring a smile to your dour mug.
Here
Posted by Aesop at 12:02 AM

I love a lot of the noise/punk/metal stuff you post, but the pop music you highlight is what really really blows my mind.

Kaz from Tim and Eric Awesome Show recommended this album to my friend. I have Kono Samourai stuck in my head.

Great album, i picked it up last year when Tower records were having a sale on stuff from the great Finders Keepers records, that label NEVER fails to satisfy, most especially the anatolian funk psyche.

Good lord, this is awesome.

This is my favorite blog, i really appreciate your energy posting this stuff, and you really expose me to stuff i like. Another great choice

So cool to see this on here dude. A track from this was used in a shitty, hipster beer ad here in Oz a few years ago. my girlfriend dug the song, did the research and turned up this album, whereupon I immediately fell in love with it. I've played it to a couple of people, who just sort of looked at me like "what's this shit?". They obviously have no ears.

Awesome stuff! Instant mood-lifter. I thought it sounded slightly recognizable, I must of seen the same beer ad.

I bought this album a couple of years ago, really cool stuff. Finders Keepers records holds alotta hidden gems, check it out :) http://www.finderskeepersrecords.com/

Thank you! This is so amazingly good! After a long week of fighting the good fight in Wisconsin, this record is really putting a smile on my face!

A ray of Green and Orange sunshine to warm this grim Maine February. Thanks!

Holy shit, yes!!! I worked at a record shop when a re-press of this was released. I read the description in the order book and could imagine just how this record would sound. Then I got the record and it was exactly as I had dreamed it would be. So much fun every time I hear it.

Incredible voices, very delicate and yet not cheesy 'cause at the same time has that sophisticated touch. Did they anything else like this?

I was looking for this album for quite a time. Thanks a lot for this, your site is a real goldmine. :D