Warriors Come Out and Plaaaaay 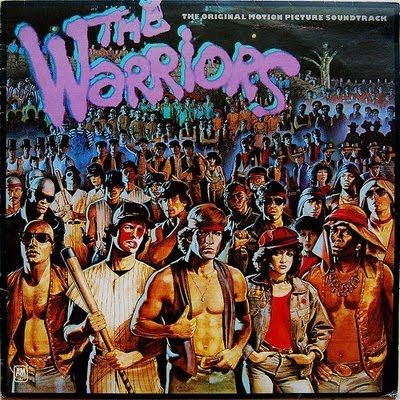 The Warriors is a Xenophonic epic set against rough and ruinous late 1970s New York, a nocturnal necropolis inhabited by stylized thematic gangs. The soundtrack evokes all the tension, angst, and afros of the film. As Cleon, Swan, Ajax, Vermin, Cochise, Fox, Rembrandt, Snow, and Cowboy encounter one peril after the next in their quest to return to their home in Coney Island, you are treated to some pulsating, funky city songs from the likes of Mandrill, Joe Walsh, and Desmond Child, among others. Put this on your iPod for a late night stroll through the city of your choice, and feel the Turnbull A.C.'s hot on your heels, or relive the moment when the Baseball Furies dropped the ball, but remember what you get when you fuck with The Orphans.
Come Out and Play
Posted by Aesop at 12:02 AM

As a kid, I remember this movie being on almost every Saturday night at 2:00am. Kind of freaked me out. And made me think all big-city gangs had a wardrobe department, too.

No one could have written a better blurb about the film. I am very glad you posted this one.

Oh, hell yes. I love this movie.
Good job with the use of "Xenophonic." One doesn't expect a drummer to know such terms, ha ha.
Thalatta! Thalatta! She is our great sweet mother. Come and look.

I can dig it

I like this film a lot. Xenophonic? It's in plain english last I checked. Do you mean xenophobic? If so, how is it xenophobic? I think I'm missing something.

for the metal connection.

Xenophonic as in based on the work of Greek playwright Xenophon.

Oh yes. Just made my wife watch this (and Robocop) recently. She made me watch Xanadu (the joys of married life). Funny to see the dude from Xanadu busting heads in.

I think it is a modern cinema classic. The cinematography is vivid and striking. The soundtrack fit the film well.

"...remember what you get when you fuck with The Orphans."

A sick ass bitch who will tangle toe to toe with the mother fucking Rogues? With a broken bottle? Hell yeaah!!!

The fact that it's based on a true Hellenic epic... icing on the cake.

i've always wanted to use those clinking bottles and the "come out and plaaaay" as the opening to a hardcore track.

You short-circuited my brain there for a second. Xenophon was a historian and a chronicler of various Socratic dialogues, not a playwright. Aeschylus, Euripides or Sophocles are the main ancient Greek dramatic writers.

Wikipedia says "The Warriors" is based on "Anabasis" by Xenophon, though!

This movie is so great that one of my bands was named after it. Great soundtrack too. If we're lucky, we'll be spared a remake... we won't be lucky.

This sounds killer dude. In related news, I have the Mandrill album (is there only one?) with the, yes, mandrill on the cover. It's hanging in my 4th grade classroom.

xenophon wasn't just a historian, he was a mercenary general and incredible badass. the Anabasis chronicles the fighting retreat of HIS former force through the Persian empire. he basically was Swan.

Best movie ever! Great review, I bought this record on the strip in Hollywood for $1. I once met these dudes from Australia that could recite every line word for word....and I thought I had that shit down, I was wrong. Super cult following...

Pavel, the band I Shot Cyrus already beat you to it with the bottle clinking sample on their Tiranus LP. an incredible band as well!probably some of the finest thrashy hardcore ever made!

Fuckin' great movie there is supposed to be a remake this year. The baseball furies and lezzie gang always crack me up and the punk cocksucker who shot the gang leader and caused all the trouble gets it in the end by the ocean.

Anonymous, thanks for the tip bro! will def. check it out.

I am part of the cult that loves this movie..... Love the soundtrack too. Good call Aesop

@Silky: Mandrill has quite a few albums... but you should start with their 2 CD anthology.