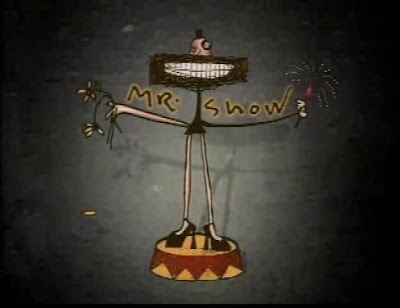 Mr. Show was one of the greatest television shows of all time and it lasted only three seasons n the early '90s. Proof of it's genius can be seen in how many of its sketches premises have actually come to pass (blowing up the moon, goth-themed fast food restaurant..) It also launched the careers of Brian Posehn, Sarah Silverman, Paul F. Thomkins, and of course it's hosts, David Cross and Bob Odenkirk. Here's a collection of musical numbers from the show.
Here
Posted by Aesop at 12:02 AM

haha! this is great! But now you must post some Space Ghost BBQ! <3 thnx ace

Even us limeys love Mr Show.

The bag hutch is designed specifically for bags and holds up to 12 bags!

"Mouthful of Sores" is the best song Brian Wilson ever wrote.

Unfortunately, I think 99.9% of America has come down with Entitleitus.

I could not agree with this post more. Thank you so much.

Y'all are brutalizing me.

Great show, what do you think of Cross's stand up Aesop?

This was the best fucking show on TV. Bob Odenkirk is on Breaking Bad and he's still incredible.

I hope this has the lonely milk machine song... I get that stuck in my head all the time at work...

This is right up there with The Young Ones and Trailer Park Boys. Thanks for this!

some of the wittiest most quotable TV ever. Not to harp on details, but the show was around for 4 seasons between 1995 and 1998. I only know because this corresponded perfectly with my married-to-the-bong college years. "look out moon 'Merica's comin' to get ya, gonna go kabloom so glad to have met ya, cuz you don't mess around with God's America!"

Seriously, though, this is awesome. Where did you find it?

Change for a dollar.