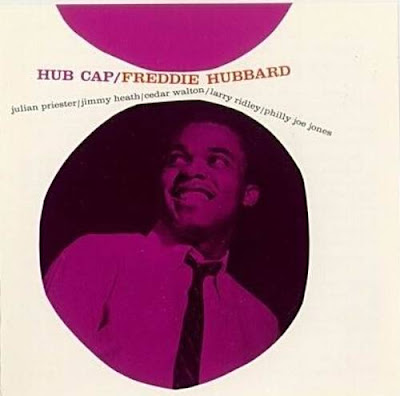 Trumpetizer Freddie Hubbard's third session for Blue Note resulted in this fine album with the hokey title, Hub Cap. On this 1961 album, Freddie is joined by tromboner Julian Priester, saxaphoner Jimmy Heath, drummist Philly Joe Jones, pianiologist Cedar Walton, and Larry Ridley on bass . The pinnacle of the album is the track "Plexus" written by Cedar Walton, but the album conatins four original Hubbard compositions. Hub Cap is also noteworthy for it's use of trombone for a three horn attack (like a triceratops.) So impressed with this album and instrumentation was Mr. Art Blakey that he enlisted Hubbard, and Cedar Walton for his Jazz Messengers, but Blakey opted to give the tromboning job to Curtis Fuller rather than Priester, sometimes Art was a dick like that. Hub Cap may not be Freddie's best album, but it is a benchmark in the career of one jazz's most innovative players.
Here
Posted by Aesop at 12:52 AM

Such a great, great record. Blue Note should box up all his albums for the label as a leader - there's only about eight of them, and they're all fantastic.

Thank you SO MUCH for the jazz.
'Been on a Bukowski/Kerouac binge lately, so as usual, your timing's impeccable!

YES. THIS SITE< TO QUOTE REUBEN LORCH MILLER IS A BOTTOMLESS COOKIE JAR

Too perfect -- you know how Charles "Beneath the Underdog" Mingus used to treat his saxophonists, right?

"Knepper toured in Africa with popular crossover flautist Herbie Mann's Afro-Jazziac group the following year, and in 1962 played on Benny Goodman's tour of the Soviet Union. This was also the year that saw Knepper's relationship with the volatile Mingus poleaxed when the bandleader punched his trombonist in the teeth, permanently affecting his embouchure and forcing him out of public jazz performance for some years."

Yah - got the 'phones a bit confused in the that last post but you get the picture.

Red Clay is badass. May I recommend "The Body and the Soul" which has Hubbard with a full string section, it's enormous.