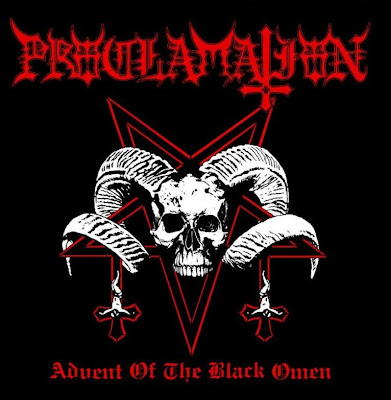 I recently had the pleasure of seeing Proclamation play live in front of a small, but dedicated, audience in San Francisco. If you are not familiar with this kvlt Spanish horde then let's just say that they worship at the profane altar of Blasphemy (with a smattering of Beherit.) You may not want to reward this kind of blatant appropriation, but these guys are hardly the only Blasphemy clone out there, but they very well may the best. Advent of the Black Omen was Proclamation's first putrid ritual of Satanic darkness (ie:album) and it was released in 2006 on the stunning Nuclear War Now label. After a brief intro, the unrelenting chaos begins. Lyrically there is quite a bit to chew on, but you won't be able to make that out (lyric sheet, another reason to buy this masterpiece.) Let's just say that over the course of Advent of the Black Omen, bitches copulate, bodies get covered in semen, anuses are kissed, goats ejaculate, crucifixes are burned, Baphomet rises, a fetus is crucified, a heirophant cuts his veins, altars are stained with the blood of the weak, all fears and nightmares come true, damned ones agonize at the shores of Styx, fallen angels march triumphant, corpses are incinerated, and towards the end, a scarlet monstrosity with ten horns rises with low tide. This sort of rumination on the visuals of hell would probably delight Bosch and Benjamin Christensen to no end, but alas Proclamation is barely known in their own time. Let's change that. Let us all march with with fallen angels, let us all stain the altar. Let us all kiss the anus of the master. Hail Proclamation, hail the Black Omen.
Here
Posted by Aesop at 12:13 AM

One of the most devastating performances I have seen. Them and Black Witchery in the same night was almost too much.

Hahaha, fucking killer. Wish I where there.

not nuts about the little of their album-material I've heard but the "imperious jaws of ire" demo is good. teitanblood are good too.

Why do most bands who worship Blasphemy seem to be really into black hoodies and black sunglasses? I've always wondered that.

Because of the photos of Blasphemy wearing them

love the photos of blasphemy sitting around a coffee table drinking what appears to be budweiser. classic.

Thanks for throwing out some of the best recommendations. Proclamation is a new one on me and I can't get enough. Sure, the may be a clone of this or that band but I think they're a much better Bone Awl - the hip ones should be all over this but their lyric probably hold them back. Anyways, love the blog - metal, jazz and otherwise (enjoying the Duran Duran of late).


THAT is fucking AWESOME! hilarious! while i love blasphemy i dont get that famous pic. like they were just chillin drinkin a beer in the living room? i would love to know the context of that pic. thanks for the laugh, made my morning!

new album is coming out soon. it's called nether tombs of abaddon, and you know it will be on my page shortly after it has released...