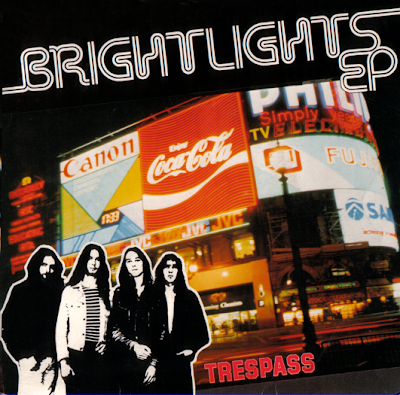 Trespass were another NWOBHM band that managed a modicum of success in their day, with a few decent singles and EPs. The third (and best) of these records was Bright Lights, which contains three tracks. The standout title track tells the all too familiar story of a city kid running afoul of the local constables between the neon and the urban filth. "The Duel" is a gallopy number about, what else, a duel. The EP ends with "Man and Machine" is about a man's love for his motorcycle. So there you have it, in just three songs Trespass cover three quintessential NWOBHM topics: City kids, heroic deeds, and motorcycles. That sort of makes Bright Lights a kind of NWOBHM cliff notes, and so highly recommended.

That geet intro rules on "the duel".

Only one comment?? Heavy metal eruption gets just 3 comments?? and Cro-mags and Godflesh both get 10+???

Some people just dont know how to party! priorities bros, get em straight.

this rules, another nwobhm gem, thanks Aesop.

Also, a bit off topic but still nwobhmish, how incredible is the Hell reunion album, going to see them next Friday, ive heard the current live show includes exploding bibles - how awesome is that?