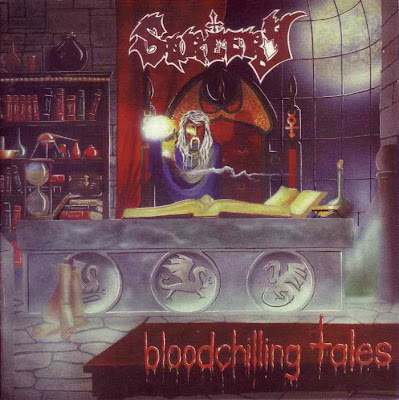 Formed in 1986, Sorcery were one of the earliest Swedish Death Metal bands on the scene. Their demo beginnings were a bit more thrash, but by the time they eked out their stellar debut, 1991's Bloodchilling Tales, it was all about the Death Metal. Sadly, this would be Sorcery's only album. Around 1994 Sorcery split and the members went on to form two bands; In Aeternum and Fear My Solitude, neither of which were very interesting, in my opinion. Whatever, this rules.
Here
Posted by Aesop at 12:28 AM

So that's three ace bands named Sorcery. Cheers for this.

Solid debut. Too bad that's it. - Thanks, Aesop!

Cheesy as it is metal has never gone wrong when there is wizardry involved. Killer album pops.

This is a very good Death Metal album. I like that the words can more or less understandable. Thanks again, Aesop!