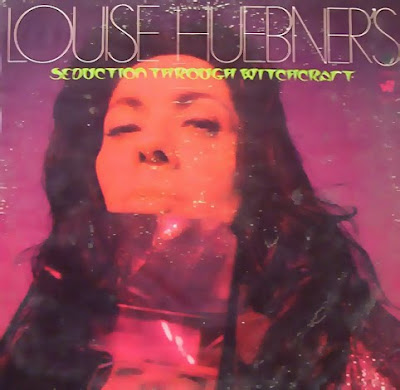 Louise Huebner is the official witch of Los Angeles, and considering the high volume of batshit crazy crones running around in the city of angels, that is quite a high honor. In the extremely witchy year of 1969, Ms. Huebner released this album in the hopes of teaching the powers of seduction as well as educate the benighted public to the realities of witchcraft. Over the course of the album's run time. Louise, with the aide of reverb and spooky sound effects, demystifies such topics as demons, magick, and most important...witch fucking.
Here
Posted by Aesop at 12:00 AM

Not to mention electronics by the same couple behind the Forbidden Planet soundtrack.

I LOVE THIS RECORD

i managed to get this record on a pure random online purchase... i was looking for witch-themed samples for my bands' album, and this is a goldmine!

Ha,ha witch fucking...just made me think of when Conans' bangin' that witchbroad,then throws her into the fire...downloading.

Since I'm already an accomplished sex witch, I don't need any new spells, but I LOVE her reading of these. Great to have playing in the background while dressing for a late-night tryst.