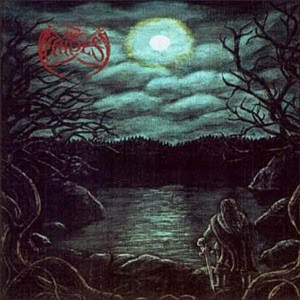 Hades were somewhat early to the whole Norwegian Black Metal party, mainman Jorn even did some time for being an accomplice to a young Varg Vikernes in some church burning, but people just don't really talk much about Hades anymore. Shame really, Alone Walkying, their demo from 1993, is a solid piece of Bathory-inspired epic Black Metal. The production is typical Grieghallen. Hades evokes the feeling of overlooking misty fjords, longboats cutting through icy waters, heroic battles, and a pantheon of bearded, bellicose gods who weave fate for Norsemen as rugged as their coastline.
Here
Posted by Aesop at 12:04 AM

Got this on tape, great stuff. Far better than Hades Almighty.

yup, this shit is what it's all about. and the song "Alone Walkyng" is killer, a track so good i think it was hard for them to match. Interested to hear the demo version!

this is really cool. For a filthy punk like me, what are some recommendations on a similar tip? I know all about bathory and dig plenty of epic power metal (Coven, Manilla Rd, Brocas Helm, whatever), if that helps. :)