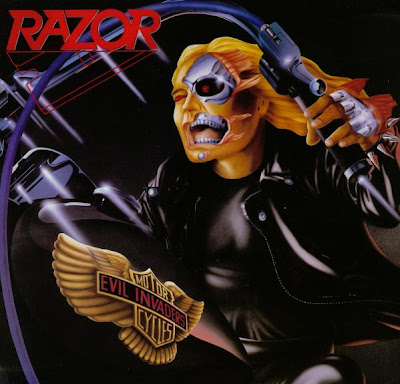 Fuck yes. Canadian Speed Metal Gods second, and far superior, album was called Evil Invaders. It would seem that between their debut and this one Razor trimmed some of the fat and became something more vicious. Evil Invaders seems a bit more punk even than Executioner's Song. Also gone is the desire to "please the crowd, it has been replaced with the need to "Spit on those who dare to pose." Cool.
Here
Posted by Aesop at 12:26 AM

I'll admit to being late to the Razor party, but I do agree later Razor is a lot more raw and feral compared to their earlier stuff. I picked up the vinyl reissues of Violent Restitution and Shotgun Justice, those fuckin' record rule! This is gonna be my next Razor vinyl pickup for sure!

cant wait to hear this! had only heard the first LP. gonna grab this tonight to accompany my beer and bowl after class! cheers! and thank you!

nice one . only knew the hypocrisy version of the title track and was always curious to hear the original

In no way superior to their debut.