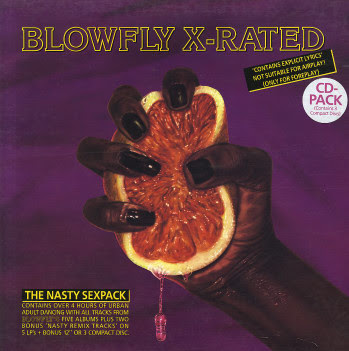 The best works as compiled by the frenetic fuck freak himself. Might be a great introduction to one of the first dirty rappers on the scene, Miami's master of the party album, the sultan of stag, the bishop of blue, Blowfly. For those of you not in the know, Blowfly is the Nom de Poon of Mr. Clarence Reid. Motherfucker has been churning out nasty fucking albums and tapes for forty years. I grew up in South Florida, where Blowfly is a local legend. His tapes were sold at flea markets, in liquor stores, head shops and often kept behind the counter in cooler record stores, where they couldn't fall into the hands of minors. Ironically it was young punk rocker kids who found Blowfly's juvenile parodies and absurdly pornodelic lyrics most hilarious. My first Blowfly tape was Blowfly's Freak Party and for that reason it remains my favorite of his vast dickography. I vividly recall listening to it with my friends and squealing in delight as Blowfly cackled and spewed forth lyrical gems like "Safari, watch her suck a lion's dick." In the course of his twenty-plus albums Blowfly managed to fuck on tape Satan, Mr. T., Fidel Castro, punkers, animals, mythical creatures, and a myriad of cock-crazed bitches and ho's. Now let Blowfly give your ear holes the deep dicking they deserve with his very best works.
XXX
Posted by Aesop at 12:01 AM

I think he's still at it to. I was really into Rudy Ray Moore as young gun, and a friend suggested I check out Blowly. This was what my mom thought all rap sounded like, just sex and dicks and tits and shit. I think he's still at it, too. A few years ago he puut out a disc called "Punk Rock Party" that hits all the right references to the early days of HC. Love it.

as a miami local, i can confirm that he is more or less still at it. saw him play downtown about two years ago.

"Blowfly's Freak Party" was my first introduction to Blowfly too! 25 years later I find myself picking up Mr.Fly at a local OKC motel before his show at The Conservatory,we talked about his Florida brothers 2 Live Crew and Morbid Angel,ha! His drummer used to manage the Mentors btw.

I'll slip this in the sound system at the next house party I'm going to. I'll see how effective it is at attracting poon.

hi there!i had the box:3cd´s t-shirt and membercard.a friend wants to copy it for his own and i never get it back.hope you upload all 3cd´s!thanx for this upload.greetz from vienna