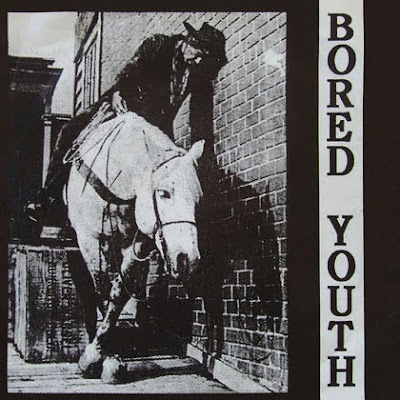 Here's a pretty killer hardcore 7" you may have missed. Bored Youth were from Detroit. Touch and Go records released their one and only statement. There is a serious dearth of information on this band and record. I believe that the band originally released this on a tape, then T&G issued the EP in limited numbers and in 1990 Lost and Found reissued it, presumably without permission. I don't know what became of the bored youths of Bored Youth, perhaps they grew up to become bored adults with boring jobs. I just don't know and now I am bored of writing this.

Link Removed at Request of Artist
Posted by Aesop at 12:13 AM

Most all the bored punk rock youth around here who kept on keeping on until they got to be a geezer like me have got a boring job alright and I guess they are kind of boring but not half as boring as some motherfuckers.

Don't suppose there are many bands around now who will only make one small record before they disappear in smoke. A band like that now might just make digital product, leaving behind no artifact, no picture sleeve of a shitface cowboy and his horse, and no one will ever wonder what the fuck happened to them.

Well, my band did.

Bored Youth is fucking boring and so are their jobs!

Bored Youth were friggin' GREAT. The bass player and guitar player were brothers, one of them committed suicide while he was in college or something. I think the singer, Rob Michaels, is a lawyer now.

God what a great cover