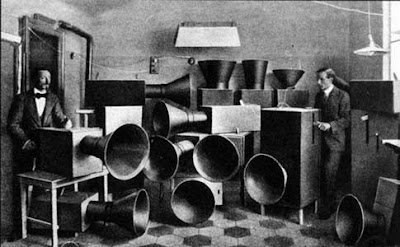 Awesome! I have seen that other people since have made intonarumori, but I didn't think any of these recordings actually survived!

Excellent! Giacomo Balla is my favorite futurist painter, but no one beats Russolo for Futurist Composer.

I was just reading up about Luigi Russolo. What a coincidence! I just listened to it, and I must say it's actually quite scary, what with all the growling of the machines and all those other inhuman noises. Most metal bands nowadays can't even measure up to how scary Russolo's work is.

You have probably seen, but should be interested in, if you have not, Musica Futurista.

i'm going to play this alone in the dark after a couple of bottles of three dollar moscato. thanks for the link...